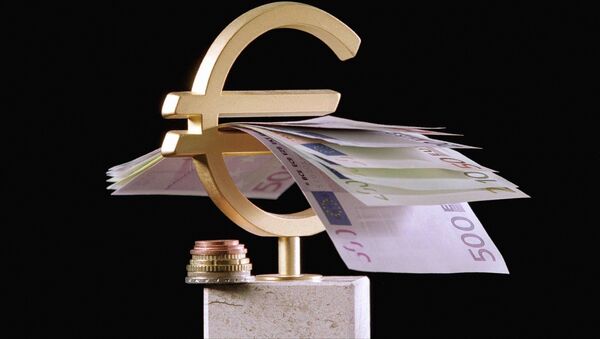 Kristian Rouz – The European Central Bank (ECB) might have to keep its ultra-accommodative monetary policies in place in the coming year as the unsustainability of the Italian banking sector and Greek debt concerns would require additional cash injections in order to prevent economic shocks to the entire Eurozone.

Greek Bailout Deal on Track as Eurozone Faces Election Realities
The hopes for normalisation of monetary policies in the single currency area are thus marred by an unlucky combination of irresponsible public and private borrowing and reckless lending practices across the nations of Southern Europe, which might complicate their relations with the North, most importantly, with Germany.

Calls for austerity have been explicitly audible across the Eurozone ever since the debt crisis earlier this decade rocked the single market. However, Greek debt remains highly volatile despite German efforts to prevent a default and Grexit in 2015. Italian banks are, meanwhile, struggling amid insufficient capitalisation, a significant burden of non-performing loans (NPLs), and weak economic growth. Therefore, Italian lenders would be increasingly prone to collapse should the ECB attempt a rate hike or wrap up its bond buyouts in the foreseeable future.

Subsequently, monetary conditions in the Eurozone will remain at their current ultra-loose levels in the form of low-to-negative interest rates and central bank cash injections, boosting the overall volume of available money liquidity. The resulting low-to-negative bond yields and further accumulation of debt will continue over the course of the next several years.

EU Finance Chief Warns of Collapse of 'Fragile' Eurozone
The Frankfurt-based regulator “greatly curtailed the risk of deflation and paved the way for a gradual return to monetary stability,” Bank of Italy Governor Ignazio Visco said. He observed, however, that December’s acceleration in the Eurozone’s inflation, seen as a positive development, was in fact “largely ascribable to the energy components” and “other highly volatile items.”

That means that risks of an extended economic stagnation and disinflationary threats are still persistent in the bloc’s economy.

Such a situation poses a major challenge to the intra-Eurozone relations, as more successful economies, such as the German powerhouse and the French services-driven model, require a quicker normalisation of monetary conditions in order to solidify and further extend their growth potential.

However, the nations of Southern Europe require more accommodative monetary conditions, which the ECB is still maintaining, and the cracks in the north-south divide might widen.

“There are as yet no clear indications of any inversion of trend in the core components driving developments in consumer prices and wage growth,” Visco said. “To bring inflation back to a path consistent with medium-term price stability, monetary conditions must continue to be highly accommodative.”

Italy's Withdrawal From Eurozone 'Would Be a Great Shock for Europe'
Visco is advocating the best interest of his country, which requires greater volumes of cash and cheaper credit in order to deal with the issue of failing banks, including the world’s oldest institutional lender, Monte Paschi. Visco is also a member of the ECB’s Governing Council.

The problem is, while the loose monetary policies help keep the risks contained in the near-to-medium-term perspective, in the longer run a collapse is imminent unless the economy and non-financial sector return on the path of sustainable expansion. And thus far, neither Italy nor Greece have demonstrated significant progress overcoming the consequences of the debt crisis of 2011.

According to the IMF’s observations, Greece will continue accumulating its public debt, which is set to reach 275pc its GDP by 2060, compared to 180pc now. The costs of public debt servicing would be at 60pc GDP by then.

This is not only a reflection of the enormous borrowing the Greek government will have to exercise to meet its obligations and reach economic goals. The weak economic growth projections are also counted in the IMF’s outlook.

In Germany, meanwhile, the ultra-loose ECB policies are seen as key to achieving the target 2-percent inflation across the bloc, after which the stimulus would need to be wrapped up.

“Once price developments are sustained, they will provide the foundation for an exit from loose monetary policy," Jens Weidmann, President of Bundesbank, said. The ECB’s “expansionary monetary-policy path is currently appropriate."

With Visco emphasising the lack of sustainability in the recent positive inflation developments, and Weidmann having stressing the progress in consumer price dynamics, the north-south divide seems more obvious. The real conflict is delayed until after inflation hits 2pc. Germany will be adamant to end the ECB’s bond buyouts and increase borrowing costs, moves that Italy and Greece would likely be opposed to.

This conflict of member-state interests might eventually trigger more nation-exit speculation at that point, highlighting the inability of the single currency area to blend these diverse economies into a truly integrated system where a one-size-fits-all monetary policy applies.