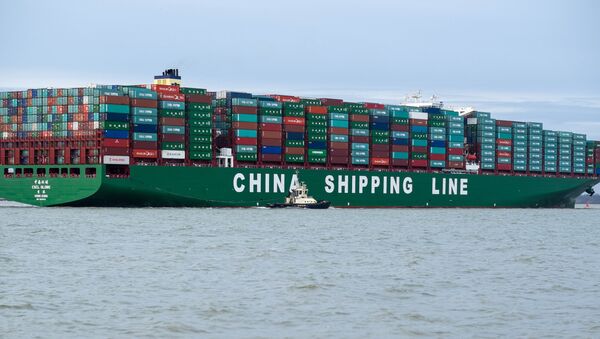 The US withdrawal from the Trans-Pacific Partnership (TPP) trade deal is an opportunity for China to fill the gap, and even pursue a free trade agreement with Mexico, Lourdes Casanova, Academic Director of the Emerging Markets Institute at Cornell University told Radio Sputnik.

Although it was uncertain whether the deal would have been ratified by the US Congress, Trump's move has finally killed off the controversial deal, which had 12 signatories and proposed to create the world's largest free trade area, accounting for roughly 40 percent of global GDP.

However, the deal was the subject of protests in the US and other countries such as New Zealand, as people feared that reducing trade barriers would have a negative effect on jobs in developed countries, and that regulatory changes would leave public institutions vulnerable to legal action from multinational corporations and intensify the commercialization of public services such as healthcare.

China was not involved in the TPP negotiations, but other signatories have said they would like to continue the project in another form, with the inclusion of China.

Lourdes Casanova, Academic Director of the Emerging Markets Institute at Cornell University, told Radio Sputnik that China is ready to assume a leadership role in support of global free trade, in the absence of the US.

"China is going to try to fill the vacuum that the US is leaving on the one hand, and on the second hand it will try to enlarge the APEC with 21 members," Casanova said.

Enter the Dragon: China Could Consider Joining TPP, Albeit With Conditions
In November, Chinese President Xi Jinping attended the Asia-Pacific Economic Cooperation (APEC) forum in Lima, where he promoted the Regional Comprehensive Economic Partnership (RCEP), an alternative to the TPP which is currently being negotiated by 16 states in East Asia and Australasia.

"China will not shut its door to the outside world but open [them wider]," Xi told APEC delegates.

Casanova said that Japan has been particularly hard hit by the collapse of the TPP.

"Japan has a historical rivalry with China, so for Japan the TPP was very important and it feels it has been left alone. At the same time, let's not forget that China is already the most important trade partner for Japan, they already have a very close relationship in terms of trade, even if the rhetoric between them is aggressive at times."

US Exit From TPP May Bring Latin America Closer to China
In the past, Mexico has seen China as an economic rival for the US import market. However, Casanova said a closer relationship between Mexico and China could be one consequence of Trump's decision to renegotiate the NAFTA trade deal, because Mexico is entering the negotiations from a weaker position than the US or Canada.

"Mexico of course is the weakest link of NAFTA, although for Mexico the US was the most important trade partner; as much as 80 percent of Mexican exports go to the US, so Mexico is left in a bit of a weak position."

"What is Mexico going to do? One thing, of course, is getting closer to China. (Although) Mexico was one of the last countries to approve the entry of China to the WTO because they saw the threat to Mexican exports of China's exports to the US. So from Latin America, Mexico was the country that probably had the most controversial stance against China. So, it would be a little bit odd if Mexico takes China's side."

"But, already they have started saying that if Mexico doesn't trade with its neighbor (the US) after the renegotiation of NAFTA, which would be the logical thing one way or the other, Mexico may turn to China," Casanova said.