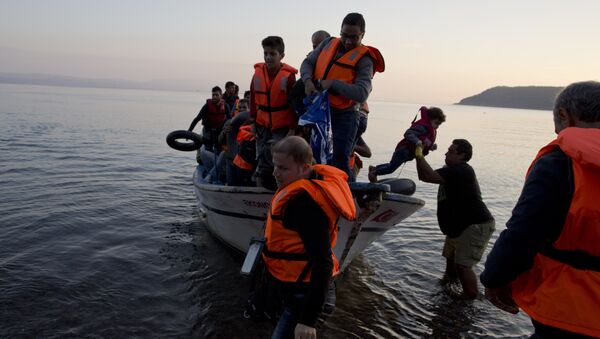 "The entry of nationals of Syria as refugees is detrimental" to America's interests, President Donald Trump's executive order reads.

All entry of individuals from Syria is suspended "until such time" that Trump determines "sufficient changes have been made" to the US Refugee Admissions Program (USRAP), according to the document. Trump has repeatedly claimed that his number one job is to protect American lives and made "Make America Safe Again" a signature component of his victorious campaign.

"I hereby proclaim that the entry of more than 50,000 refugees in fiscal year 2017 would be detrimental to the interests of the United States, and thus suspect any such entry until such time as I determine that additional admissions would be in the national interest," according to Trump's executive order.

The postponement will exist for at least the next 120 days, when no refugees from Syria will be allowed into America, Sputnik has learned. Following the four month period, refugee claims will be prioritized according to the extent refugees experienced religion-based persecution as minority groups, the order notes.

The order indicates that state and local governments should be given a voice in deciding where refugees can settle as allowed by the current legal framework. It does not mention 'safe zones' in Syria.

The visa interview waiver program for refugees has been immediately and indefinitely suspended.

Trump's cabinet officials have noted that the aim of the executive order will include further procedural elements to eliminate any "threat to the security and welfare of the United States."

Supporters see the move as Trump making good on his campaign promise to suspend the issuance of visas from countries known to be home to heavy terrorist activity.

"These [executive orders] will not make our nation safer," Awad tweeted, "rather they will make it more fearful and less welcoming."

The order will implement a "multi-month ban on admissions from all countries" until a better vetting process can be put in place. Further, Trump will prioritize introducing a biometric system to that keeps a record of all entries and exists to and from the US.