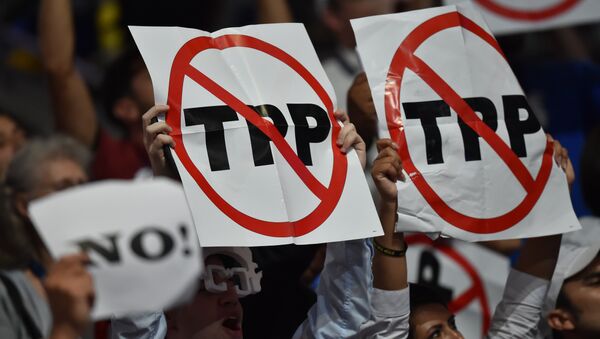 © AFP 2023 / Nicholas Kamm
Subscribe
International
India
Africa
The idea of inviting the EU to join the Trans-Pacific Partnership (TPP) trade agreement is a pie in the sky, whereas China could become a TPP member, albeit with preconditions, Russian expert Yekaterina Arapova told Sputnik.

America in Full Retreat? How Trump's Exit From TPP May Bolster China's Advance
In an interview with Sputnik, Russian foreign affairs expert Yekaterina Arapova from the Moscow State Institute of International Relations, wrote off the idea of inviting the EU to join the Trans-Pacific Partnership (TPP) trade agreement, calling it a pie in the sky.

Asia
'China Will Expand Influence': TPP Countries Look for Post-US Trade Deal
Arapova recalled that the text of the TPP agreement is openly pro-American in terms of the protection of intellectual property rights and in terms of labor legislation-related issues, it sticks to US norms.

Asia
Impact of TPP's Demise on China, Japan and Regional Security
Hidenobu Tokuda, senior economist at the Japan-based Mizuho Research Institute, echoed the sentiment, telling Sputnik that Trump's decision to pull out of the TPP would result in a shift in influence in the Asia-Pacific region.