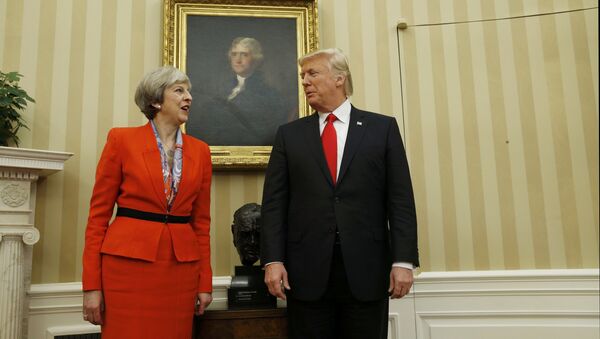 The presser is the first news conference of newly inaugurated US President Trump since taking office, with British Prime Minister Theresa May the first foreign leader to be received at the White House.

The United States and United Kingdom have renewed their deep ties after a meeting between US President Donald Trump and UK Prime Minister Theresa May, Trump said.

"We look forward to working with you as we strengthen our mutual ties in business, commerce and foreign affairs," Trump stated. "Great days lie ahead for our two peoples and our two countries."

Trump accepted an invitation to visit the United Kingdom later this year.

"I have today been able to convey Her Majesty the Queen’s hope that President Trump and the first lady would pay a state visit to the United Kingdom later this year… and the president has accepted," May stated.

Trump and May discussed setting up a trade agreement between the United States and the United Kingdom.

"We are discussing how we can establish a trade negotiation agreement, take forward immediate high level talks, lay the groundwork for US-UK trade agreement and identify the practical steps we can take now in order to enable companies in both countries to trade, do business with one another more easily," May stated.

London and Washington are seeking ways to increase cooperation against Daesh in cyberspace and intelligence.

"Our two nations are already leading efforts to face up to this challenge and we’re making progress… but we need to step up efforts," May stated. "Today we’re discussing how we can do this by deepening intelligence and security cooperation and, critically, by stepping up our efforts against Daesh in cyberspace."

Donald Trump said that it is too early to discuss the possibility of lifting sanctions on Russia.

"As far as the sanctions, very early to be talking about that," he stated.

"On defense and security cooperation we are united our recognition of NATO as the bulwark of our collective defense and today we’ve reaffirmed our unshakeable commitment to the alliance," May stated. "Mr. President, I think you said, you confirmed you’re 100 percent behind NATO."

"As far as again, Putin and Russia, I don’t say good, bad, or indifferent. I don’t know the gentleman. I hope we have a fantastic relationship. That’s possible, and it’s possible that we won’t," Trump stated. "We will see what happens. I will be representing the American people very strongly, very forcefully."

The United Kingdom's exit from the European Union, or Brexit, will put the country on the path to success, Trump said.

"Brexit will end up being a fantastic thing for the United Kingdom," Trump stated. "I think, in the end, it will be a tremendous asset, not a tremendous liability."

Washington will work with Mexico to renegotiate trade agreements and other aspects of the bilateral relationship.

Trump added that earlier in the day he had a "very friendly call" with Mexican President Enrique Pena Nieto that lasted for about an hour.