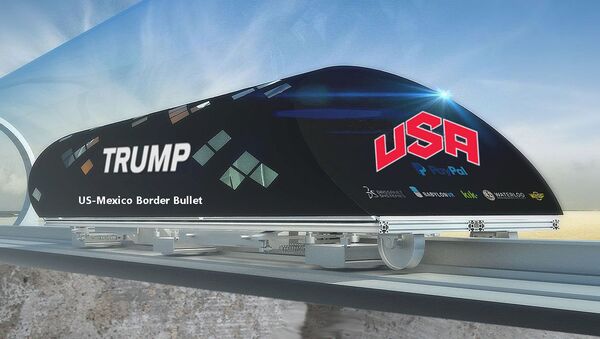 © Blogger photo
Subscribe
Phil Butler
All materials
The Great Trump Wall may be the one project that helps make America the greatest again.

Whither the Donald? Investors Divided Over Perception of Trumponomics
President Donald Trump’s border wall construction is cause for the mainstream media in America to reel and spin, and for the liberals in congress to lose their heads too. The man who started day-one fulfilling campaign promises now has his opposition off balance and punch drunk. Amid all the political mechanics, what if those infrastructure plans he’s touted really can make America the greatest?

The US-Mexico border is 1,933 miles long. In contrast, the Great Wall of China is over 5,500 miles long. Donald Trump wants to secure America’s southern border in the 21st century by undertaking a monumental construction project many say is foolhardy or impossible. Interestingly, most of the Great Wall of China was built during the Ming Dynasty (1368–1644) when the machine of construction was a strong back. In fairness, it seems a look at President Trump’s wall is best undertaken by looking at past US projects, potential future ones, and their effects short and long term.

Before I launch into Trump Wall comparatives, this report from the Economic Policy Institute makes part of the argument for Trump’s wall and other infrastructure projects for us. Essentially the report tells of the positive role increased infrastructure investments can have for solving several pressing challenges that the American economy faces today. Reading through it, I am wondering if Mr. Trump was not ahead of me in studying the role of construction in the US. This excerpt from the report is a good lead into our Great Trump Wall prospectus, author Josh Bivens writes:

“In the longer term, the most pressing economic challenges for the U.S. economy concern how to provide satisfactory living standards growth for the vast majority of people. Such growth requires two components: rapid overall productivity growth, and a stabilization (or even reversal) of the large rise in income inequality that occurred in the three decades before the Great Recession, a rise in inequality that kept overall productivity growth from translating into living standards growth for most Americans.”

Mexican President Says His Country Will Not Pay for Wall
The report goes deep into the micro-macro economic impacts of various levels of infrastructure investment, but the takeaway no matter which model is chosen is millions of higher paying jobs. It is the undervalued American who elected Donald Trump in the first place, if we recall. Obama’s income inequality mess is not so obscured. Now to how a Great Wall will help fix this.

When President Franklin D. Roosevelt launched his “New Deal” programs to restart the American economy after the Great Depression, many politicians and bankers said he was crazy. History shows now, the massive economic and social impact FDR’s policies had. In 1933 25 percent of Americans were unemployed, some 4,000 banks failed, and over 32,000 businesses went broke in that year alone. The lives of the people from this era of American history were changed inextricably, the average American of this generation lived their entire life in fear of losing everything they had. This one aspect governed decades of work, art, family, education, and life overall.

FDR’s New Deal had far reaching effects both positive and negative. Most of the negative effects came about because Roosevelt believed in big government and addressing social welfare concerns, more so than creating a Keynesian-style macroeconomic stimulus model. Donald Trump’s infrastructure (and wall) plans lean toward this macroeconomic model. But let’s first look at a few large scale FDR projects for comparison.

Just A Wall You Say?

This report at the Digital Public Library of America (DPLA) frames the New Deal properly, and especially where the restructuring of government agencies are concerned. Within the article projects like the Civilian Conservation Corps (CCC) are spotlighted.

Trump's 'America First' Policy Thwarts India's Job Plan
The CCC was a public work relief program that operated from 1933 to 1942 in the United States for unemployed, unmarried men from relief families as part of the New Deal. The far-reaching effects of this popular work program can never be fully gauged, but during the time of the CCC, enrollees planted some 3 billion trees, constructed trails, lodges and related facilities in more than 800 parks nationwide and upgraded most state parks, updated forest fire fighting methods, and built a network of service buildings and public roadways in remote areas that are still in use today. But the CCC was considered an “emergency” relief program.

The Public Works Administration (PWA) and the Works Progress Administration (WPA) employed workers, both skilled and unskilled, to create public buildings and roads, and to bring essential utilities to Americans. The Rural Electricity Administration (REA) was one agency, the effects of which every American feels to this day. Before the REA, only a very few farms in the US had electricity (11%). The REA caused public works in America to boom, and the integral steps taken then helped development today’s infrastructural and agricultural landscape. The impact of the PWA is best seen via the 34,000 construction projects including airports, large electricity-generating dams, warships for the Navy, and bridges built under the program.

PWA workers built 70% of the new schools in the US, as well as one-third of the hospitals built in 1933–1939. The PWA’S Grand Coulee Dam project employed more than 8,000 people during construction, and national landmarks like LaGuardia Airport, the Lincoln Tunnel under the Hudson River in New York, and especially the  Overseas Highway connecting the Florida Keys were massive undertakings.

Weighing the Mnuchin Factor: Dollar Might Be Heading for Devaluation
Then there was the slightly more controversial Work Projects Administration (WPA), which when it was disbanded in World War II, employed 8.5 million people. Unlike the PWA, the WPA employed largely unskilled labor to work on thousands of projects of massive scale and reach. These workers built thousands of gymnasiums, stadiums, roads, schools, libraries, and a multitude of facilities still in use in America today.

The average WPA worker received $52.50, or the equivalent of $893.00 in today’s money. It’s important to note here that many Europeans under today’s austerity make less than half this amount per month.  Breaking just this New Deal agency down is simple. Total expenditures on WPA projects through June 1941 totaled approximately $11.4 billion dollars, or the equivalent of $186 billion today. That’s less than one-third of the single fiscal year 2017 Defense budget signed into effect by former President Barack Obama.

I think this number helps make my point ever more clear. The trillions Mr. Trump spoke of being wasted on war, could have easily made every American richer and more secure spent elsewhere. US roads and other infrastructure are in a state of rapid decay, and ambitious projects only seem to emanate from the Pentagon.

I will not discount the negative aspects of FDR’s New Deal socialism. However many negative examples can be brought to bear though, it’s clear that generations of Americans lived their “American Dream” largely because of ambitious ideas. Donald Trump’s Mexico wall is a very ambitious project, but no more so than most in America’s great buildup into becoming the world’s mightiest economy. Let’s look at the new president’s “Great Mexico Wall” from a positive perspective.

US Middle-Class Faces Heavy Burden With Construction of Wall on US-Mexico Border
The conservative estimates on the cost of this border wall range from $15 to $25 billion dollars for a structure 1,000 miles long, 40-foot-tall, 7-foot-deep, and 10-inches thick. On this expenditure, there is much contention with regard to “who” will pay for the construction. Mr. Trump says he can make Mexico pay, while his opponents say the Mexicans won’t. What no one is grasping, is the fact it does not matter who pays for it, and that it does not matter how much it costs. I’ll let you wrestle with this concept, but consider the New Deal investment in infrastructure. Then, expand your ideas on what can be accomplished with this wall.

Returning to our “infrastructure investment” research report, if Mr. Trump gets Congress to fund $100 billion for an expanded “Border Wall” project, millions and millions of Americans will benefit directly and indirectly. Insert the WPA figures here, the imagine a wall that is more than a wall. What kind of benefit will cities like Brownsville and  El Paso in Texas, Nogales and Yuma in Arizona, and San Diego in California glean from this influx of business? What will be the effects of reduced flows of illegal aliens? What other infrastructure benefits can be generated? Not one of the detractors to Trump’s plan has asked any of these questions. What if “Trump’s Wall” is more than a simple barrier? Remember we talked about infrastructure and modernization? What if the wall incorporated ultra-modern transport aspects?

Trump Immigration Orders Trigger Quick Reaction From Protesters at White House
I’ll leave off here protracting the cost to every American for between 11 million and 25 million illegal immigrants in the country. Mr. Trump’s assertions about stemming drug traffic bear mentioning, but my purpose is to expand the reader’s vision of what the new president is really proposing with ALL his initial decrees. “Making America Great Again” is only doable if we consider where we might have been in an alternative reality. What if Trump’s wall and his infrastructure ideas had been implemented in 1990 instead of now? That’s food for thought, but generating GDP through good paying jobs building things far outweighs trillions spent blowing up other countries and bailing out bankers. Lest I diverge, here is an idea (fantasy) that reflects what I think Mr. Trump is hinting at in his “Great Wall” efforts.

What if the US-Mexico border wall were a conduit, a barrier, and an infrastructure boost? What if America’s first high-speed train were to run atop this wall? What kind of urban and rural growth could such a modern transportation linkage afford each-and-every-town-along the route? How much more would a monorail atop such a wall cost? Or does that even matter?

India May Become First Country to Try Out Superfast Hyperloop Transportation
I took note or President Trump’s meeting with innovator Elon Musk just the other day, what if all this talk of infrastructure includes mass transport along the lines of the Maglev? Better still, I can envision Musk’s Hyperloop conceptual high-speed transportation system running on top of or inside this border wall. Can you? Even if you cannot, the idea of paving the way for high-speed tube journeys is compelling. Imagine reduced time and costs for moving people or commodities along a brand new commerce route! I should think Texans headed to California would enjoy a 3-hour hyperloop ride for with plenty of leg room aboard a train, versus crunching up in an aluminum tube 30,000 feet in the air. Then again, maybe I am dreaming.

Ah, but congressional thinkers and disgruntled democrats cannot envision any future but our failed past. Maybe this is why somebody like Donald Trump scares them so badly. Sending illegals back home is suddenly racism. Building a wall that should have been there all along is madness. Investing a trillion dollars in Americans is incomprehensible, but regime changes that flood the world with refugees are not. Why is it Americans cannot foresee building a border wall and infrastructure masterpiece? The way I look at it, even building a monument to the greatness of Donald Trump is fantastic if it helps people in America have a better life. After all, isn’t this why we elect leaders in the first place?

000000
Popular comments
This article is incredibly informative, and shows Trump as a potential visionary, as well as a leader who wants to protect the population, and turn America into a truly 21st Century power. By killing a numbers of birds with one stone, he accomplishes a myriad of things, that the liberal elite cannot seem to envision on their own.