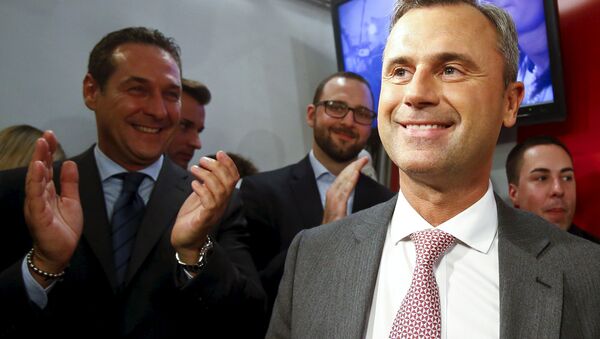 “I am in general skeptical of free-trade agreements… I am sure that good economic and intergovernmental relations are possible without such agreements. I hope that the TTIP will not be realized, because I believe that this agreement will not benefit business in neither the US nor Europe,” Hofer said commenting on the prospects of the TTIP agreement after US President Donald Trump’s decision to withdraw the United States from the similar Trans-Pacific Partnership (TPP).

Free trade agreements are likely to cause significant economic problems for countries if their members have different levels of development, production costs and regulations, Hofer, who narrowly lost Austria's 2016 presidential election, added.

US-EU TTIP Free Trade Deal Still Possible With Trump as President - Berlin
Trump, who is a staunch supporter of bilateral trade agreements as opposed to free trade areas, signed a decree to pull the United States out of the unratified 12-nation TPP agreement on Monday. The president may also take the country out of the North American Free Trade Agreement (NAFTA) and is likely to stall talks on the TTIP.

Concerning Austria's ruling "grand coalition" between the Social Democratic Party of Austria (SPO) and the Austrian People's Party (OVP), he said that it has failed and should be dissolved to hold snap elections in the country.

“At the moment, we are faced with the fact that neither SPO nor OVP is able to carry out necessary reforms in Austria. A disorder reigns between the ruling parties. Therefore, I advocate for a dissolution of this coalition and call for snap elections as the new government has failed to carry out necessary reforms," Hofer said when asked about the likelihood of early elections in Austria.

EU Needs to Cut Red Tape, Taxes to Overcome Economic Crisis - Austria’s Hofer
The ruling coalition survived the 2016 presidential election, in which Hofer lost narrowly to a Green party member and independent candidate Alexander Van der Bellen. The coalition was formed after the 2013 legislative election after the two major parties gained some 50 percent of the vote. FPO came third with over 20 percent.

Hofer expressed confidence in FPO gaining a much higher share of the vote in a future election, stating that the party is ready to form a government.

"FPO’s chances are very good. Last time we scored 20.5 percent. According to the recent polls, we may receive 35 percent. I am ready to contribute to FPO’s success at the next elections allowing us to become part of the new Austrian government,” he said.

The next parliamentary elections in Austria will be held in 2018 or earlier.