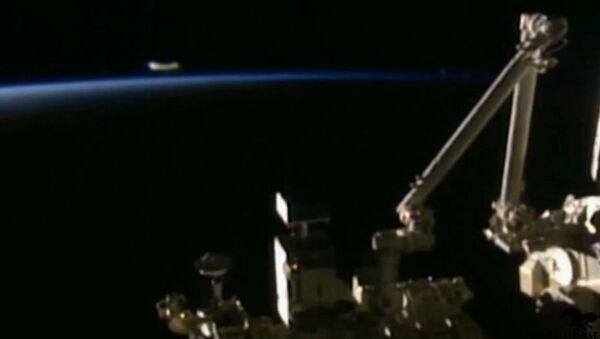 A mysterious object appeared on the NASA live video feed from the International Space Station (ISS), prompting some alien hunters to declare it a UFO.

Extraterrestrial enthusiast John Craddick of Wolverhampton, England, told the Mirror that he frequently watches the ISS live feed but has "never seen any UFOs on it before."

"I was showing a friend how it worked at around 11.30 p.m. when the feed  cut out, and 35 seconds after it came back on, this object appeared," he said. "At first it was really small and then it grew bigger, lasting for about 25 seconds."

What makes him so sure what he saw was a UFO? "Nothing human… can fly that high," said Craddick.

Some of Craddick's fellow alien hunters have their doubts about Craddick's conclusion. "It is astonishing how many UFOs are seen buzzing around the ISS, but like this video there is usually a simple explanation for them," said UFO expert Nigel Watson to the Daily Mail.

Watson claimed that UFOs sighted near the ISS are usually just "lens reflection that appears and then goes as the light changes."

"Many UFOs caught by the ISS's cameras can be also be explained as images of space junk or satellites in the distance, and even very small flecks of paint or particles can appear like UFOs when caught by the bright light from the sun."

NASA has not commented on Craddick's sighting, but a past statement from the aerospace group reads "Reflections from station windows, the spacecraft structure itself or lights from Earth commonly appear as artefacts in photos and videos from the [ISS]."

Every few months brings a new sighting of a would-be UFO from the ISS's external camera, which livestreams to the public every day. In November 2016, footage of a tiny speck flying past the camera before the feed cuts out made the rounds online.

Conspiracy theorists concluded that the distant object was an alien spacecraft, suggesting that NASA intended to hide this from the public by cutting the feed. However, the ISS regularly loses its signal with the ground.