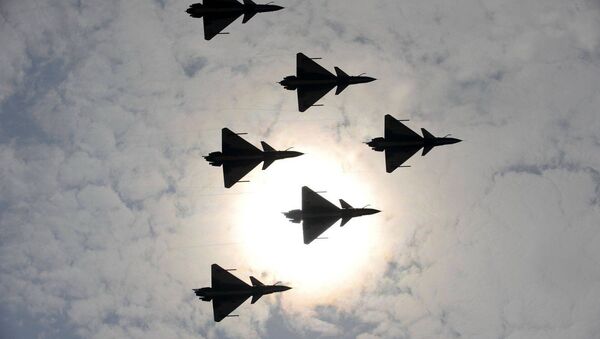 According to the newspaper, a photo posted on the People's Liberation Army website, shows a J-11B fighter jet armed with an unknown rocket almost one-fourth of the length of the 22-meter-long plane.

Genuinely Domestic Design: Introducing China’s HJ-8 Anti-Tank Missile
The paper added that the photograph was made during an aerial-warfare drill held in northwestern China in November 2016.

The newspaper quoted military expert Fu Qianshao as saying on Thursday that China was apparently developing a new missile capable of destroying high-value targets, such as early warning aircraft and flying tankers, which normally stay far from combat zones.

Fu also said that while most of the existing air-to-air missiles had a range of about 100 kilometers, the new missile would be able to destroy targets up to 400 kilometers away.

"Successful development of this potentially new missile would be a major breakthrough in the [Chinese] Air Force's weapons upgrade," the expert said.

He added that the ultra-long-range missile would be able to enter the stratosphere at an altitude of up to 50 kilometers and fly there until it spotted its target and then swoop down to destroy it.

000000
Popular comments
First the Dong Feng 21D to keep the Carriers at 1500 km away from the Chinese coast that eliminates all Carrier planes . Now the new 400km range air to air missile that keeps the AWACS and flying tankers at bay. You can say that the Chinese have neutered American Naval airpower.