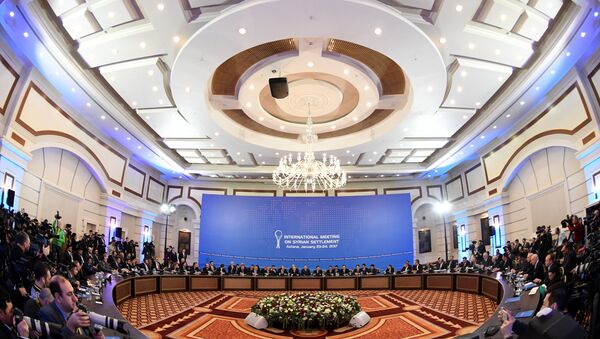 © AFP 2023 / Kirill KUDRYAVTSEV
Subscribe
International
India
Africa
It is up to UN Security Council to decide whether the outcome of Astana talks will be cemented in a UNSC resolution, UN Special Envoy for Syria Staffan de Mistura told Sputnik.

"Regarding the question about possibility of the outcome of Astana meeting and the establishment of mechanism for the ceasefire to be brought to the attention of Security Council, this is up to the Security Council members, of which Russian Federation and Kazakhstan are members," de Mistura said.

The envoy said he would "certainly be ready to make briefing specifically on that" if the Security Council decided to consolidate the Astana talks outcome with either a Security Council resolution or an International Syria Support Group (ISSG) decision.

The second day of Astana talks on Syria's crisis settlement ended Tuesday with Russia, Iran and Turkey agreeing on the establishment of a trilateral mechanism to monitor the ceasefire in effect since late December.