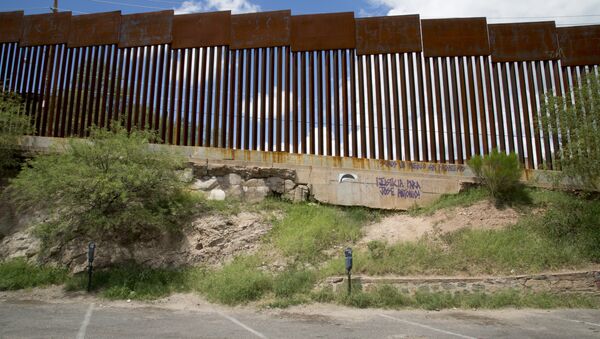 President Donald Trump has ordered the construction of a wall along the southern border of the United States on Wednesday. The order was part of a series of actions aimed at stopping illegal immigration and cracking down on the number of refugees resettling in the nation.

The executive order was signed by Trump during a visit to the Department of Homeland Security.

"Building this barrier is more than just a campaign promise. It's a common sense first step to really securing our porous border," said White House spokesman Sean Spicer. "This will stem the flow of drugs, crime, illegal immigration into the United States."

Chants of “build the wall” became a rally cry among Trump supporters during his campaign. On Tuesday, Twitter exploded with both outrage from the left and excitement from the right, after he tweeted, “big day planned on NATIONAL SECURITY tomorrow. Among many other things, we will build the wall!”

The Department of Homeland Security and White House staff will begin building a wall on the US-Mexican border, President Donald Trump said on Wednesday.

"The secretary of homeland security working with myself and my staff will begin immediate construction of a border wall," Trump confirmed.

In an interview with ABC airing Wednesday night, Trump said that construction of the wall will begin "as soon as we can. A soon as we can physically do it." He added that it could be in just months.”

Trump also told the network that the US "will be reimbursed at a later date" by Mexico.

"I'm just telling you there will be a payment,” Trump said.

Mexican President Enrique Peña Nieto is expected to arrive in Washington to meet with Trump at the end of this month. Trump has asserted that immigration will be a focus of the meeting.

"The Secretary, through the Director of US Immigration and Customs Enforcement, shall, to the extent permitted by law and subject to the availability of appropriations, take all appropriate action to hire 10,000 additional immigration officers," the order stated.

Trump was also expected to suspend immigration from seven nations known to be hot spots for terrorism on Wednesday, including Iraq, Iran, Libya, Somalia, Sudan, Syria and Yemen.

During his campaign, Trump had originally vowed a full ban on Muslim immigrants, but later corrected himself to say it would be focused on regions with high terrorist activity.

“To think that Trump’s first 100 days are going to be marked by this very shameful shutting of our doors to everybody who is seeking refuge in this country is very concerning,” Marielena Hincapié, the executive director of the National Immigration Law Center told the New York Times. “Everything points to this being simply a backdoor Muslim ban.”

Other national security issues expected to be addressed in the coming days include reviewing whether to resume “black site” detention programs, and declaring the Muslim Brotherhood a terrorist organization.

Additionally, Spicer said during Wednesday's press briefing that the orders will strip federal grant money from so-called sanctuary cities and end the "catch and release" policy of previous administrations.