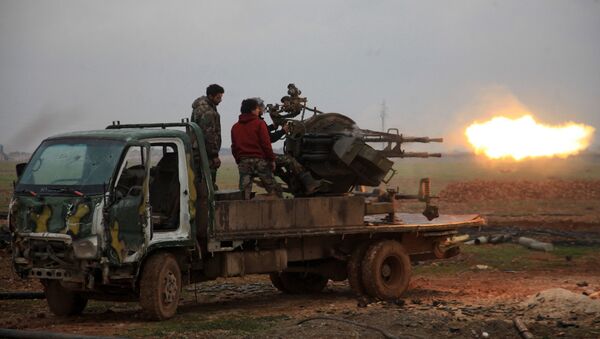 The Syrian Army is currently some five miles from al-Bab, according to the UK-based Syrian Observatory for Human Rights. Turkish-backed forces are aiming to secure hold of al-Bab, as well. On Tuesday, Turkish Deputy Prime Minister Numan Kurtulmus commented that claims of Turkey handing over al-Bab after driving out ISIL militants are false. Rebel groups backed by Turkish Special Forces, tanks, and jets have been bombarding the outpost since December 2016.

Concurrently, the Free Syrian Army (FSA) opposition group suffered a staggering defeat in northwestern Syria at the hands of al Nusra, or Jabhat Fatah al-Sham (JFS), a recently rebranded jihadist group. New peace talks between several opposition groups are set to be held in Kazakhstan this week after Moscow, Tehran, and Ankara reached a ceasefire between Syria and the opposition rebel groups, but not Daesh. The powerful JFS faction launched its offensive after accusing FSA of conspiring against it at the upcoming negotiations. FSA has faltered in its attempts to adequately arm and organize its forces.

"Nusra wants to end the FSA," an FSA official told Reuters. The rebel opposition groups have struggled to galvanize behind a single unifying force. Many groups have defied Assad, but fail to agree on whether Assad should be replaced by Sunni jihadism, which JFS has supported, or nationalism, which the FSA has advocated. JFS is strongly affiliated with Al-Qaeda. If JFS is successful in eliminating the FSA, "the ones who attended [peace talks in] Astana will be finished," according to an FSA official.