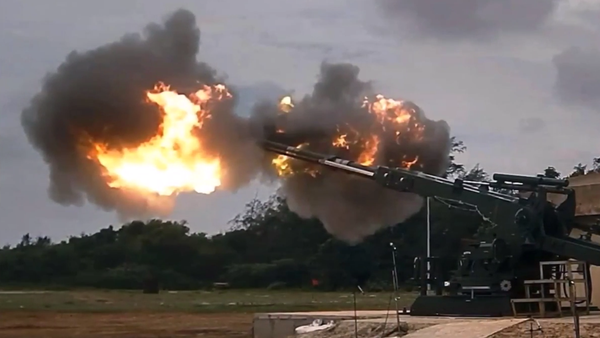 The Advanced Towed Artillery Gun System (ATAGS), India’s first indigenous 155mm/52-caliber towed artillery gun, will be a joint project of two private-sector corporations. This is a reversal of the usual practice of giving only state-owned companies these kinds of pricey orders.

State-owned Defence Research and Development Organization (DRDO) will be developing ATAGS with two private-sector firms, Tata Power SED and the Kalyani Group. Valued at $4.5 billion, the production order could be be a potential windfall for India’s private defense groups, as New Delhi’s army seeks to fill its requirement of over 1,500 towed guns.

Retired Indian Army major general and defense analyst Bhupinder Yadav told Defense News that "Two ATAGS prototypes have already been made and are under trials. MoD has already projected immediate requirement of 114 guns. The production can start within two years of order placement. With two partners having [their] own production line, [they] can meet the requirement faster."

An unnamed Indian Army official said that a prototype, with a range of 28 miles, will also undergo trials, testing its abilities in different climates and terrain, along with range accuracy.

The official said, "For serial production to be established, it would take at least upwards of one and [a] half years…In all, ATAGS will take at least four years for induction into artillery," adding that the gun system would be more cost effective than similar systems purchased from foreign weapons suppliers.

DNA Info quoted Praveen Kumar Mehta, director general of DRDO’s Armaments and Combat Engineering Systems, praising the development, saying, "We take pride to do things in the country and even if it's not at par with the international standards, we still strive to make it the best. Hence, this gun is a very good example of how the DRDO and the Ordnance Factory Board (OFB), along with the industry, can come out with a system within the country and compete with the best in the world. In fact, we look forward to the export of such systems in the time to come."

ATAGS was designed to supplement Dhanush, the 155 millimeter/45 caliber artillery gun that was an indigenously-built improvement on the Swedish-manufactured FH-77B 155 mm/39 caliber towed howitzer.

Indian Defense Military Buyers to Go Back to Negotiating School

"The task of development and manufacturing of [the] gun system was allotted to Kalyani Group, based on their know-how, competence, experience and infrastructure. Bharat Forge (a company of Kalyani Group) has taken up the role of co-developer, providing diverse inputs in design, manufacture and development," said Rajinder Bhatia, head of the Kalyani Group's Defence and Aerospace division.