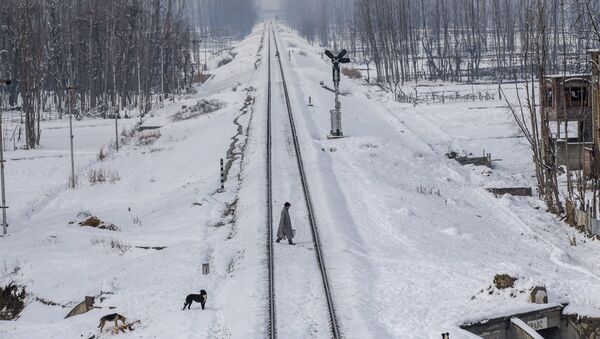 © AP Photo / Dar Yasin
Subscribe
Three separate avalanches smashed through Indian Kashmir killing 7. As heavy snowfall continues, the authorities are bracing up for more reports of avalanches in the next 24 hours.

Central Italy Avalanche Death Toll Up to 21, Eight Still Missing
New Delhi (Sputnik) — Six civilians and an Indian Army officer were buried under three separate avalanches killed in India administered Kashmir on Wednesday. The army officer was killed in a snow avalanche which destroyed an army camp at Sonemarg, a popular tourist destination during the summers.

Meanwhile, normal life halted across the Kashmir valley after fresh snowfall since Tuesday. The strategically important Srinagar-Jammu highway has been closed since Tuesday due to heavy snowfall. Power outages have become frequent in many parts of the valley. "For the next two days there are chances of widespread snowfall and rains across Jammu & Kashmir," predicts the meteorological department.