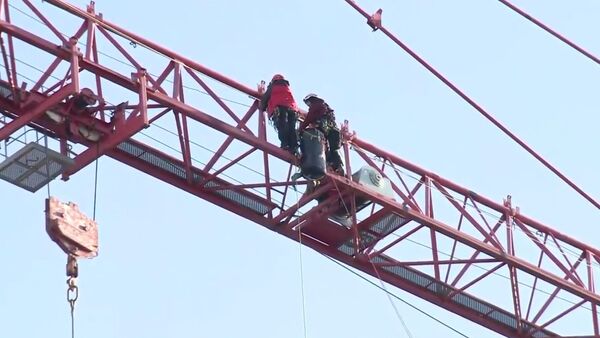 © Photo : Youtube/ciobanu fabian
Subscribe
International
India
Africa
Seven activists of Greenpeace environmental group have climbed a crane not far from the White House calling for a sustained movement and resistance against environmental policies of US President Donald Trump, the organization announced in a press release on Wednesday.

WASHINGTON (Sputnik) — The activists deployed a 70-foot (some 20 meters) banner of the word "resist" next to the White House.

"The activists from around the country are still in place, calling for those who want to resist Trump’s attacks on environmental, social, economic, and educational justice to contribute to a better America," the release stated.

The emergency personnel are responding to a Greenpeace protest on top of a construction crane a few blocks away from the White House, local police said in a statement on Tuesday.

"Multiple government resources are being tied up, and unfortunately streets are blocked while first responders try to safely address this matter," the statement noted on Twitter.

Trump Signs Orders on Reviving Keystone XL, Dakota Pipelines' Construction
Washington, DC Police added that while they respect the right to protest, the individuals who climbed the crane are acting in a way that is "extremely dangerous and unlawful."

On Tuesday, Trump signed executive orders to advance the construction of the Keystone XL and Dakota Access pipelines. The projects have previously been canceled due to environmental concerns.

When signing the executive order on the Keystone pipeline construction, Trump said that "we are going to renegotiate some of the terms and, if they like, we'll see if we can get that pipeline built."