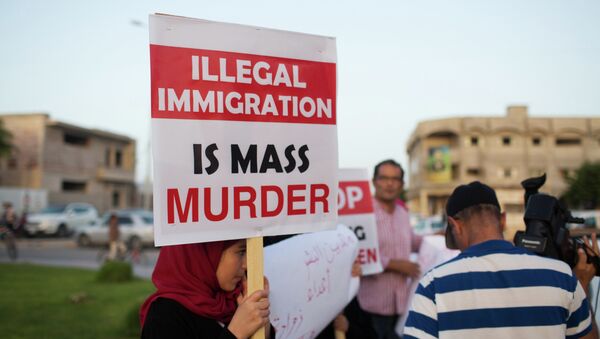 The EU has announced a series of projects to stem the flow of migrants crossing the Mediterranean from Libya, but stopped well short of Malta's call for an EU-Turkey style agreement to send refugees back to the country, which is unsuitable for relocation, Sputnik has been told.

EU High Representative of the Union for Foreign Affairs and Security Policy Federica Mogherini EU Commission for migration, Dimitris Avramopoulos set out a series of new plans to stem the Mediterranean flows from Libya, including US$215 million for projects in 2017 to support training and equipping the Libyan Coast Guard.

​However, the move is in contrast to the calls from Malta — which holds the six-month rotating presidency of the EU — for an EU-Turkey style migrant deal, whereby the EU funds the return of "irregular migrants" — those refused asylum in Europe — to Libya.

"Unlike Turkey, Libya is in the midst of a civil war, with three rival 'governments' competing for control of law enforcement bodies. Even with the help of UNHCR/IOM officials, it is madness to expect Libya to be able to implement the EU's plans," Mattia Toaldo, a policy fellow for the European Council on Foreign Relations's Middle East & North Africa program, told Sputnik.

A deal with #Libya to stop migrations? A bad idea, I wrote for @ecfr https://t.co/g6JOWx3zu8

"Again, unlike Turkey, Libya has never even tried to ratify international conventions on human rights. Indeed, violations of basic rights in Libya are one of the main push factors for migration to Europe, and migrants arriving in Italy have reported being abused, starved and even raped in Libyan detention centres," he said.

The Prime Minister of Malta Joseph Muscat said the EU needed to do a deal with Libya to prevent the migrant flows across the Mediterranean, suggesting that the EU-Turkey deal was a blueprint for such a plan.

"There should be a political signal from the EU that it is ready to engage with Libya," he said, warning of an "unprecedented" flow of migrants crossing from Libya once the warm weather returns"