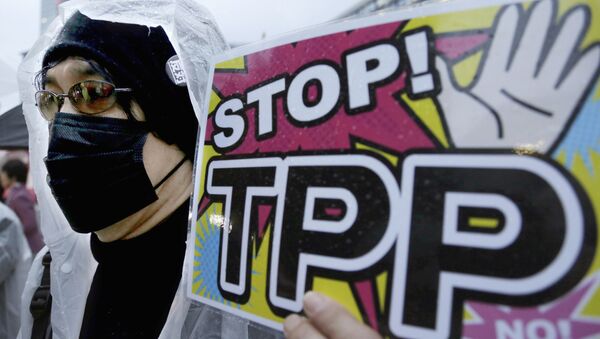 Tim Kaine claims that Trump's decision to embrace an “America First” trade strategy by abandoning the Trans-Pacific Partnership rather than working to improve the controversial trade agreement could result in negative consequences.

“There was an aspect of the deal that I really felt was problematic and I couldn't support,” Kaine said on Tuesday. “But just completely backing out rather than trying to make the deal better could be negative.”

On Monday, Trump signed an executive order withdrawing the United States from the TPP, citing concerns that poorly negotiated multilateral trade deals often give US companies incentives to move factories overseas in search of lower labor costs and taxes.

McCain Warns Trump: US Exit From TPP Puts China in Asia’s Economic Driver Seat
Kaine, a Virginia Democrat who would have been Vice President had Hillary Clinton been elected President said he was willing to see what Trump proposes as an alternative to the TPP.

When asked if he thought Trump’s “America First” rhetoric could negatively impact any negotiations on a replacement, Kaine said, “yes.”

“I’m not sure [Trump] is interested in bilateral deals with all those nations,” Kaine added.

US Senate Foreign Relations Committee Ranking Member Ben Cardin told reporters on Tuesday withdrawing from TPP could backfire by creating a void for China to fill. Cardin added, however, that the United States must remain engaged in Asia and withdrawing does not preclude the possibility of bilateral agreements.

Earlier on Tuesday, former National Security Advisor Susan Rice said in a statement that withdrawing from the deal is a blow to US global leadership. Senator John McCain told CBS on Monday leaving TPP would cede economic dominance in the Asia-Pacific region to China.

"They have now a very significant economic role, where 60 percent of the world's economy is in the Asia-Pacific region, and we are stepping back."

Both Trump and Democratic presidential opponent Hillary Clinton had vowed to reject the TPP, a deal that former US President Barack Obama supported.