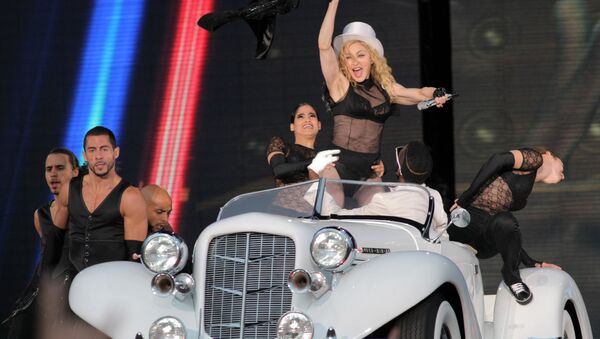 © RIA Novosti . Alexei Danichev
/
Go to the photo bank
Subscribe
Madonna is back-peddling as fast as she can after saying on Saturday that she has thought “an awful lot about blowing up the White House,” at the Women’s March in DC.

Her comment drew immediate backlash online, and an announcement that the Secret Service would be investigating the situation.

During her speech, broadcast live on multiple networks, the singer dropped the ‘f-bomb’ four times.

“I'm angry. Yes, I am outraged. Yes, I have thought an awful lot about blowing up the White House. But I know that this won't change anything,” Madonna told the sea of participants, some wearing pink ‘pussyhats,’ who broke out in massive applause. “'We cannot fall into despair. As the poet W. H. Auden once wrote on the eve of World War Two, ‘We must love one another or die.’ I choose love. Are you with me?”

Following the speech, a spokesperson for the Secret Service told the Gateway Pundit that while the agency will be investigating, it will be up to the US Attorney’s Office on whether charges will be filed.

On Sunday, the musician took to Instagram to say that her remarks had been taken out of context.

Yesterday's Rally. was an amazing and beautiful experience. I came and performed Express Yourself and thats exactly what i did. However I want to clarify some very important things. I am not a violent person, I do not promote violence and it's important people hear and understand my speech in it's entirety rather than one phrase taken wildly out of context. My speech began with " I want to start a revolution of love." ♥️ I then go on to take this opportunity to encourage women and all marginalized people to not fall into despair but rather to come together and use it as a starting point for unity and to create positive change in the world. I spoke in metaphor and I shared two ways of looking at things — one was to be hopeful, and one was to feel anger and outrage, which I have personally felt. However, I know that acting out of anger doesn’t solve anything. And the only way to change things for the better is to do it with love. It was truly an honor to be part of an audience chanting “we choose love”. 🙏🏻🇺🇸♥️🙏🏻🇺🇸♥️🙏🏻🇺🇸♥️🙏🏻🇺🇸♥️🙏🏻🇺🇸 #revoltutionoflove♥️#revolutionoflove♥️*******************************************************

“I am not a violent person, I do not promote violence and it's important people hear and understand my speech in it's entirety rather than one phrase taken wildly out of context.

My speech began with ‘I want to start a revolution of love,” Madonna wrote. “I spoke in metaphor and I shared two ways of looking at things — one was to be hopeful, and one was to feel anger and outrage, which I have personally felt. However, I know that acting out of anger doesn’t solve anything. And the only way to change things for the better is to do it with love.”

White House Counselor: 'I Don’t See the Point' of Women’s March on Washington
The backtracking was not accepted by Trump supporters who flooded her Instagram post, calling her a “terrorist.” Many expressed support for a Secret Service investigation.

Others compared her claim that the media spun one small sound bite out of context from a larger message within the full speech to what President Trump faced during the election season.

“You want people to listen to you speech in it entirety and not a phrase taken wildly out of context….hmmmmm isn't that what you and your followers have been doing to President Trump all along,” a commenter asked, noting that Trump is been repeatedly subjected to unpleasant soundbites being twisted.

The White House weighed in, pondering the response if similar comments had been made about President Barack Obama.

“Some of the things that were said yesterday, I’m not going to give the person any credit, but one of the actors said that — or one of the singers said she wanted to blow up the White House,” White House chief of staff Reince Priebus said on Fox News Sunday. “I mean, can you imagine saying that about President Obama?”

000000
Popular comments
This filthy creature is a disgrace . Satanic madonna will burn.

Andrew J
24 January 2017, 03:58 GMT6
000000
All the love talk in the world won't spare you a secret service investigation if you tell the public that you want to blow up the White House. Not a smart thing to do.
Darrell R
24 January 2017, 04:50 GMT6
000000
Newsfeed
0
New firstOld first
loader
LIVE
Заголовок открываемого материала
Access to the chat has been blocked for violating the rules . You will be able to participate again through:∞. If you do not agree with the blocking, please use the feedback form
The discussion is closed. You can participate in the discussion within 24 hours after the publication of the article.
To participate in the discussion
log in or register
loader
Chats
Заголовок открываемого материала
Worldwide
InternationalEnglishEnglishMundoEspañolSpanish
Europe
DeutschlandDeutschGermanFranceFrançaisFrenchΕλλάδαΕλληνικάGreekItaliaItalianoItalianČeská republikaČeštinaCzechPolskaPolskiPolishСрбиjаСрпскиSerbianLatvijaLatviešuLatvianLietuvaLietuviųLithuanianMoldovaMoldoveneascăMoldavianБеларусьБеларускiBelarusian
Transcaucasia
ԱրմենիաՀայերենArmenianАҧсныАҧсышәалаAbkhazХуссар ИрыстонИронауОssetianსაქართველოქართულიGeorgianAzərbaycanАzərbaycancaAzerbaijani
Middle East
Sputnik عربيArabicArabicTürkiyeTürkçeTurkishSputnik ایرانPersianPersianSputnik افغانستانDariDari
Central Asia
ҚазақстанҚазақ тіліKazakhКыргызстанКыргызчаKyrgyzOʻzbekistonЎзбекчаUzbekТоҷикистонТоҷикӣTajik
East & Southeast Asia
Việt NamTiếng ViệtVietnamese日本日本語Japanese中国中文Chinese
South America
BrasilPortuguêsPortuguese
NewsfeedBreaking
06:06 GMTQueen Elizabeth II Picks Up Her 'MI6 Anti-Hacker Encrypted' Phone 'for Two People Only'
06:01 GMTFukushima Plant's Operator Starts Surveys to Prepare for Wastewater Dump, Reports Say
05:52 GMT'All Mouth and No Trousers': Boris Johnson 'Fed Up' With Priti Patel Over Migrant Channel Crossings
05:35 GMTFood Prices in Israel Much Higher Than in EU, Here's Why
04:46 GMTCOVID-19 Live Updates: Israel Closes Borders for Two Weeks Over Omicron Strain Fears
03:42 GMTHis Life, His Rules: Biden Spotted With Mask Down on His Chin While Inside Shop
03:28 GMTSouth Africa Laments Travel Restrictions, Calling Them ‘Punishment’ For ‘Excellent Science’
02:57 GMTGhislaine Maxwell Ready to Take Stand at Trial to 'Save Her Own Life' - Report
01:58 GMTMike Tyson Reveals Marijuana Makes Him 'Different Person' as He Launches New Cannabis Line
01:52 GMTConcerns About Spread of New Covid Strain Rise as Another Migrant Caravan Crosses Into US - Report
01:28 GMTMass Theft Occurs at Best Buy Store in Minnesota, Police Say
00:26 GMTTrump Keeps Mt. Rushmore Sculpture With His Face on It on Display in His Office
00:01 GMTA Glimpse of Hope: Biden Approval Rating Climbs 2 Points, But Still Scores Low on Economy - Poll
YesterdayAbbott Says Texas Is Ready For Possible Cold Winter Due to ‘Dozen Laws’ Signed
YesterdayBarnier Says France Has to 'Be Ruthless With the British' Amid Migrant Crisis - Report
YesterdayEx-Labour Leader Corbyn Slams 'Irrational' Suspension From Party One Year On
YesterdaySudanese Army Repels Attack by Ethiopian Troops With Casualties on Both Sides
YesterdayWHO Says No Need for Panic Over Omicron Coronavirus Strain as Much Remains Unknown
YesterdayBiden's First Christmas Tree Will Reportedly Cost Taxpayers $139,000
YesterdayMemes Flood Twitter After WHO Dubs New Covid Strain Omicron