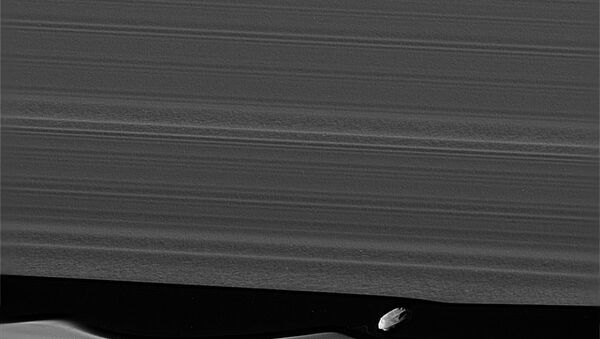 NASA’s Cassini spacecraft has sent back its newest round of photographs, including those of Daphnis, a moon of Saturn located inside one of its iconic rings.

Daphnis, a lumpy rock about 5 miles wide, orbits within the 26-mile wide Keeler Gap, an open space within the A Ring, the outermost of Saturn's rings. Daphnis pushes small rocks called moonlets out of the Keeler Gap, sending gravitational ripples through A Ring that are revealed as visual waves. It is considered a shepherd moon, meaning it helps keep the rings stable through its own gravity. 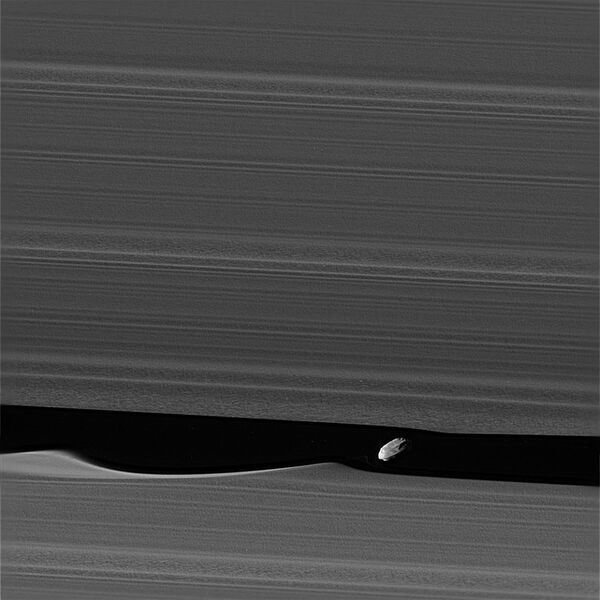 A NASA photo of Daphnis, an unusual moon of Saturn.
© NASA . Cassini

Daphnis's tendency to create waves has earned it the nickname "wavemaker," and photos demonstrate it doing just that. Cassini was a mere 17,000 miles (almost nothing by astronomical standards) away when it took the pictures.

Saturn has at least 62 moons and countless smaller satellites and dust that make up its rings. Daphnis is one of the smaller moons, and its secluded placement within the A Ring has made it difficult to study.

Cassini, a joint project between NASA, the European Space Agency, and the Italian Space Agency, was launched in 1997 and arrived in 2004. Its primary purpose is to gather information about Saturn's numerous satellites. It has discovered six previously unknown moons since 2004, of which Daphnis is the largest and most interesting, due to its unusual orbit. 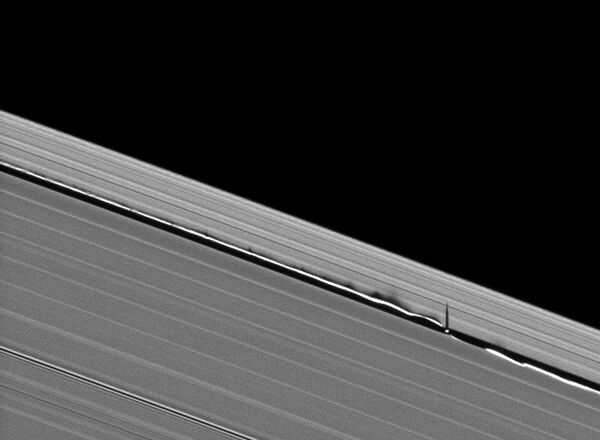 In 2016, it began the final stage of its mission, to study the outer rings. This mission has yielded high quality photos of satellites such as Tethys, an ice moon known for a large "eyeball" crater, and Mimas, the so-called "Death Star moon" due to its resemblance to the fictional super weapon from the Star Wars movie franchise.

It also took a photo of Pandora, which until 2014 was believed to also be a shepherd moon.

Cassini will continue to study Saturn's ring moons, including Prometheus, another shepherd moon of which little is known. After that, it will approach the planet itself for the closest and most detailed photos ever taken of Saturn.

Shortly afterwards, Cassini will run out of fuel and fall toward Saturn, where the ringed planet's atmosphere will consume it, even as the spacecraft sends back final images and data on its fatal descent.