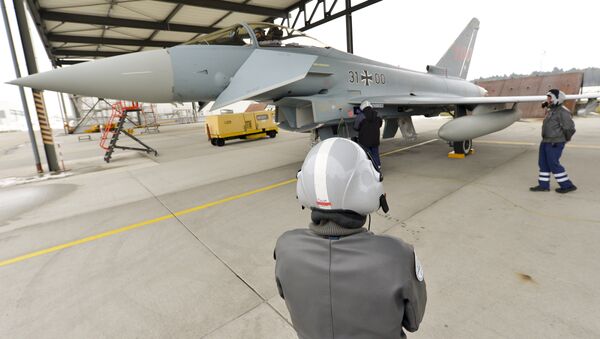 © AFP 2023 / GUENTER SCHIFFMANN
Subscribe
International
India
Africa
Germany is reportedly close to deciding whether to replace its short short-range air defense systems. If approved, this action would signal the beginning of a €460-million (about $490 million) procurement program over the next 5-10 years.

There would likely be an additional €2 billion used at a later stage, according to Reuters,with new radars and lasers to be added at an additional cost further down the line. Berlin reportedly sees value in the system that German weapons manufacturer Diehl Defense developed for Sweden.

This system features a dual-cab tracked vehicle, built courtesy of BAE System’s Hagglunds Vehicle AB, and a variant of the IRIS-T missile. Germany has used the IRIS-T on their Eurofighter Typhoon fighter jets and a change in software could make the missile adaptable for a ground-based launch.

The Defense Ministry will submit its requirements once the matter has been settled. A formal strategy for acquisition would follow.

Last year military officials from Germany and the US recognized that Europe was experiencing an expanding gap of short-range air defense weapons (SHORAD), including an inability to defend against drones.

Following the meeting, Army acquisition chief Katrina McFarland told Defense News that the picture was not bleak, but that there definitely was progress to be made.

"We are better off than we thought we were and so we have at least the possibility of moving very quickly," she said, "And where we have gaps, we have already started providing technological solutions both internationally as well as organically to the US."

A report from the National Commission on the Future of the Army also highlighted an "unacceptable modernization shortfall" in that area.

In a white paper drafted in 2016, Berlin made missile defense a top priority, collaborating with forces in the Netherlands to better organize NATO missile and air defense systems.

This focus came after pressure from US President Donald Trump to increase military spending.

Decisions on SHAROD acquisition are not expected to be finalized until 2018, at the earliest, but primary work on the initiative could begin this year if the Ministry decides to add €20 million to the defense budget.

An alternative to Diehl’s system, built by US-based weapons manufacturer Raytheon, is called the Network Centric Air Defence System. According to Raytheon, this weapon has been sold to Spain, the Netherlands, Norway,  Finland, Oman  and the United States, and is the result of a collaborative effort with Kongsberg Gruppen of Norway. Slovakia and Belgium are also reportedly looking to expand their short-range missile capabilities.

One unnamed military official said, "It's great news for Germany and NATO that Germany is moving ahead to increase its short-range air defenses."

"NATO countries have been aware of the integrated air and missile defense challenge for some time,” said Thomas Karako of the Center for Strategic & International Studies,  "We have to get on it, but we're not there yet."