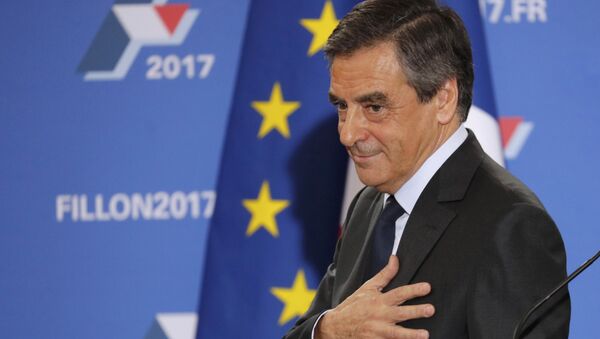 French presidential candidate Francois Fillon’s stated intention to engage in rapprochement with Russia is aimed at strengthening his country’s role on international arena, a French lawmaker, who is a member of The Republicans party, told Sputnik.

Immigration, Russia on Agenda as French Frontrunner Fillon Meets Merkel
MOSCOW (Sputnik) — On Sunday, Fillon said in an interview with Le Monde that Russia should be a partner for Europe in order to jointly tackle terrorist threat, adding that Moscow's actions in Syria helped to avoid the triumph of Daesh terrorist organization, banned in Russia and other countries, and called for a new economic partnership with Russia.

"Fillon seems to be faithful to his ideas concerning foreign policy including on improving ties with Russia. He understands that it is mandatory for France to get back within the big game especially if the American president is willing to make deals with Russia," Nicolas Dhuicq, who is also a secretary of the French-Russian friendship group in the Parliament, said, reminding of Fillon's warning during his recent visit to Berlin, where the presidential candidate pointed at risks that Washington and Russian might forge better ties at the expense of the Russia-EU relations.

Le Pen, Fillon, Macron Likely to Win 1st Round of French Presidential Election
In Sunday's interview with the French newspaper, the presidential candidate also noted that the restoration of ties would have to be linked to the resolution of the conflict in Ukraine noting that Kiev, like Moscow, would have to respect the Minsk agreements.

"Concerning the drama in Ukraine, we must consider that people are suffering a lot due to their government lack of willingness to abide by the Minsk agreements. I feel that Americans and Europeans are starting to understand it," Dhuicq explained, commenting on Fillon's statement.

The European Union and the United States imposed a series of sanctions on Russia over its alleged involvement in the conflict between Kiev and the militia in the east of Ukraine. Moscow has repeatedly denied the accusations.

The French presidential elections will take part on April 23, with the run-off scheduled for May 7, and Fillon will face Marine Le Pen, the far-right leader, former Minister of the Economy Emmanuel Macron running as the candidate from self-founded En Marche Party, Jean-Luc Melenchon as another independent candidate and either Benoit Hamon or Manuel Valls from the Socialist Party.