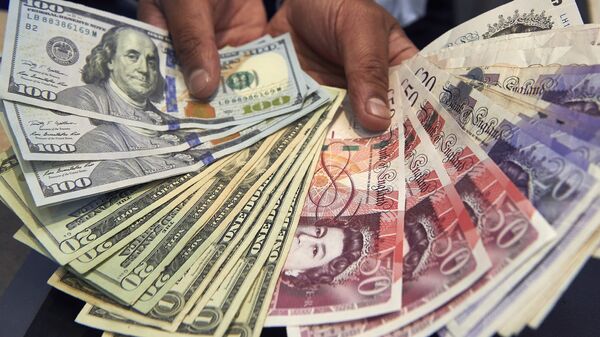 © AFP 2023 / Niklas Halle'n
Subscribe
International
India
Africa
Britain's pound sterling has been volatile against the US dollar after the UK's Supreme Court made its ruling that parliament must vote before Article 50 can be triggered and Britain begins the formal process of leaving the EU.

The currency jumped after the court ruled against the British government's claim that parliament was not required before triggering Article 50 in what Kevin Dowd, Professor of Finance and Economics at Durham University labeled "judicial activism."

"It's judicial activism, it's crazy, but the markets had already accounted for the shock factor surrounding the court's Article 50 judgement," Professor Dowd told Sputnik.

The pound had hit a month high in the run-up to the ruling and following the speech by Britain's Prime Minister Theresa May, in which she ruled out membership of the single market in favor of immigration controls.

"Theresa May's recent speech was historic. Ruling out the single market is a major step forward and the right thing to do, had she not done, we would be looking at a horrible situation," Professor Dowd said.

Meanwhile, casting a dark cloud over the ruling was the claim by Guy Hands, boss of private equity firm Terra Firma, who suggested Brexit could cut wages by 30 percent over the next 20 years.

In an interview with Bloomberg Finance, he said Britain could see a 30 percent decline in wages in real terms over the next two decades if it is to compete outside Europe.

Brexit: The 'Economic Cost' of Sterling's Surge in Value After UK PM's Speech
Hands also predicted higher interest rates and that immigrants from Europe will be replaced with workers from the Indian subcontinent and Africa, who would be willing to work for lower pay.

Predictions Professor Dowd doesn't share: "I think we are already competing outside of Europe and we're going to become more orientated with the rest of the world. There will be higher standards of living, lower consumer prices and lower production costs," he said.

However he says there is the potential for "major short-term problems" in Britain's economy.

"I think the banking system is much weaker than we acknowledge, so it's very reasonable to expect another massive crisis in the European banking system, which I believe has fundamental problems."

However despite what Professor Dowd suggested was "scaremongering," he remains "convinced [Brexit] will be good for Britain's economy."

Financial markets might be poised for more shocks, meanwhile people in Britain are still waiting to hear more on the government's future Brexit plans.