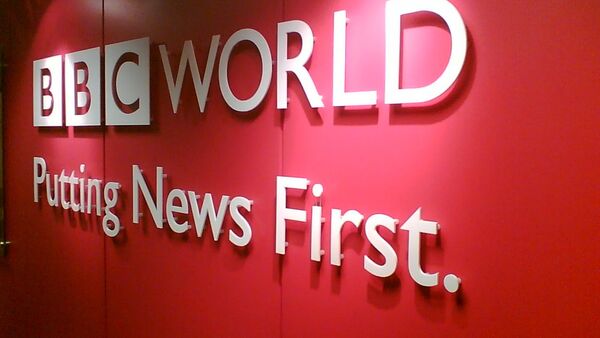 Angus Gallagher
All materials
Notorious for its relentless globalist disinformation, is the BBC now a threat to not just internal political stability in target states- but to world peace?

The Holy Grail of heavyweight diplomacy in the 70s and 80s was détente between the West and Russia. Now, as a lasting settlement of unresolved issues from frozen conflicts and missile defence becomes possible, with NATO armies parked just 135km from St. Petersburg, hopes for a world that is both safer, and fairer, are under siege from the globalist order.

The BBC, due to its state funding, vast infrastructure, political connections to the elitist cartels, and fervent multicultural ideology is a prime weapon in the unfolding battle between free peoples and the soft totalitarianism of nation-hating globalism.

BBC Aiming to Expand in Russia to 'Counter Propaganda’ With More Gov’t Support
Fatefully, the precious opportunity to defuse the tangled mess of broken promises and ruthless opportunism that has left the Baltic and Ukraine trapped on a geopolitical knife-edge and Europe defenseless before the mass migration tidal wave is now in utmost peril as both America and Russia face a barrage of globalist disinformation. Make no mistake, the BBC’s true goal is to undermine democracy whether that’s in Washington, post-Brexit Britain, or, indeed, the Kremlin.

At the forefront of this dogged counter offensive against democratic values, the BBC has become a veritable fountainhead of propaganda for the expansionist neoliberal hegemony of the EU-NATO Axis.

In short, anyone who owns a television in Great Britain is legally obliged to pay the exorbitant licence fee which funds BBC operations- regardless of whether he watches the BBC or not. With guaranteed funds, the BBC cynically operates a system where British citizens are trapped into complicity in their own oppression. Consequently, to say that the BBC is utterly despised in its own country is a glib understatement.

Mainstream Media Wakes Up to Its Own 'One-Sided' Propaganda Campaign Over Syria
Naturally, the first step in resisting the BBC is to deconstruct its own mythology; that starts with not only exposing the network’s pretence at impartiality as an utter lie- but debunking the very idea that the BBC is British in any genuine sense: In fact, the BBC is only as British as the EU, as the third world hell-hole of Londonistan, or the corrupt Westminster elites that serve the global liberal order. Covertly funded by both Brussels and George Soros- the BBC is British only by the most impertinent use of the term. The appropriation of British identity by such flotsam is in fact an act of cultural genocide.

Unsurprisingly, the BBC has only ever shown absolute contempt for the British people: it is a bastion of political correctness that has now been weaponized against sovereign democracy in both the United States and Russia- a continuation of the vitriolic campaign it has waged against any expression of British identity. True to its Trotskyite mission of erasing all borders, the BBC has declared open war on the nation state- its strategy focused on destroying free peoples from within while maintaining the pressure of militarized liberalism from without.

BBC Plumbs the Depths of Indecency With Daesh Comedy Sketch
The BBC, long known as a slick globalist misinformation bullhorn, spliced its live feed of the presidential inauguration with subtitles from a children’s show called ‘The Dumping Ground.’ The subs included phrases like ‘Just shut it, yeah?’ and ‘No-one wants you here.’ The Dumping Ground refers to the protesters’ slogan of ‘Dump Trump.’

On a more sinister level, the BBC, notorious for its long-standing paedo scandal, anti-Russian propaganda, whitewashing of migrant sex crimes, and subservience to Brussels tweeted that President Trump had been ‘shot in the arm’ during a failed assassination bid. The BBC tweet originated with BBC Northampton at 10.52 GMT and read: ‘Breaking News: President Trump injured in arm by gunfire.’ Lamely, the BBC later claimed its Twitter account had been hacked- a tactic met with derision by Brexiteers who are all too bitterly aware of the BBC’s relentless antics- which have included everything from eulogizing a migrant sex attacker in Newcastle as a victim of ‘Russian aggression’ to encouraging the wheedling Khan family to agitate against President Trump.

The lies have even extended to grossly underestimating crowd strength during the swearing-in ceremony and claiming that President Trump had ordered a bust of Dr. Martin Luther King removed from the Oval office. Relentlessly, the mainstream corporate media is screaming that the international liberal order is about to fall to- and it’s kept simple not to confuse anyone unnecessarily- hate.

BBC Shows Strange Subtitles During US Inauguration Broadcast
That the Trump presidency may lead to a new Reykjavik Summit with the potential to gift humanity with a ‘new Yalta’ and an infinitely more stable international security environment is something the street mobs are not only kept ignorant of- it would simply incite them further even if it were known: Inclusion and tolerance doesn’t extend to patriotic Europeans eager to escape the EU, no more than it does to Russians- or, for that matter, working families in America’s rust belt.

Indeed, the West’s new owners see such forces in an age of compensatory population replacement as mere obstacles- enemies of progress who are dying off with each election cycle. Thusly, the would-be saviors of the world seemingly have no interest in such core issues as nuclear disarmament and ending militarization- no doubt because, until last week, the arsenals of the EU-NATO Axis were at the disposal of aggressive liberal expansionism into Eurasia.

The BBC: Half truths, prejudice, and outright lies

The BBC’s mantra is as subversive as it is dangerous: Russia is revanchist. It must be isolated. Sanctions must be imposed. Eastern Europe lies prostrate before the Russian bear. Moscow is slaughtering the innocent left, right, and center. Russia weaponized migration from the Middle East to destroy the EU. It shot down MH17 for thrills. Russia attacks its neighbors because it wants to resurrect Stalin’s red imperium. GRU hackers are everywhere. And just as implausible as the aforementioned obligatory propaganda checklist, the icing on the cake: President Putin runs an autocracy where journalists fear mass extinction.

In America, the BBC’s message is no less spurious: President Trump is ‘the Kremlin’s candidate.’ American values are under threat. Trump supporters are racists and xenophobes. President Trump’s patriotism is a ruse to justify bigotry. Only NATO expansion into the distant east can keep the peace.

Is There Anything He Doesn't Fund? Soros Closely Connected to DC Women's March
The President is politically illegitimate. Trump supporters are the same kind of petty isolationists who nearly gave Europe to Hitler. The American people are now facing ‘buyers guilt’ and digging in to impeach their own president as soon as they can. And again, the icing on the cake: President Trump is a lying sexual predator.

If the BBC were not the propaganda channel that it so obviously is, they would report the news and leave it at that. Opinions of the type written above would be honestly stated as just that- opinions, and either challenged, or balanced by alternative facts. But in the BBC’s world even the very idea of alternative facts is derided and met with gales of laughter.

The role of honest journalism is to protect the weak by reporting truth, to give a voice to the lost, the left behind, and the marginalized. The BBC, being the elitist sham that it is, instead has embarked on a strategy to double victimize citizens: It both punches down at the little guy and seeks to undermine those patriots like President Trump or President Putin who step forward to protect him.

Given the role the BBC played in the Arab Spring, its potential to incite civil unrest, its information war on sovereign democracy, its links to the deep state, its loyalty to Brussels, and its utmost animosity to peaceful coexistence and mutual respect between the West and Russia- the time has surely come to ask whether BBC operations should be banned on the territory of both the Russian Federation and the United States. If such a ban were imposed, it would be the greatest gift to the British people who remain trapped in the humiliating nightmare of the BBC’s Orwellian grip.