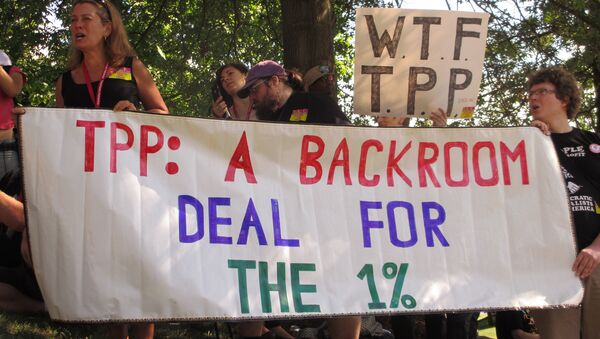 President Donald Trump said that the US will start pulling out of the 12-nation Trans-Pacific Partnership (TPP) trade agreement to protect American jobs and kick-start economic revival.

In a statement issued after Trump’s January 20 inauguration, the White House named the planned withdrawal from the TPP as a major priority for the new administration’s effort to bring down unemployment and breathe new life into the stagnant US economy.

"This strategy starts by withdrawing from the Trans-Pacific Partnership and making certain that any new trade deals are in the interests of American workers," the White House release stated.

Trump's Start: US to Withdraw From TPP, Renegotiate NAFTA Deal
During his presidential campaign, Trump has repeatedly criticized the TPP and expressed the desire to shift the focus from global trade to national economic development in order to support the US economy.

Warning about the catastrophic impact the TTP pact, initiated by the Obama Administration, could have on the US economy, Donald Trump is committed to negotiating “fair trade deals” that would benefit American manufacturers and workers.

The restrictions on Asian imports proposed by Donald Trump are part of his strategy to revive domestic production and give up on the “global division of labor.”

TPP a boon to transnational corporations

The TPP began as an expansion of the Trans-Pacific Strategic Economic Partnership Agreement signed by Brunei, Chile, New Zealand and Singapore in 2005. Beginning in 2008, Australia, Canada, Japan, Malaysia, Mexico, Peru, the United States and Vietnam joined the discussion for a broader agreement, bringing the total number of countries participating in the negotiations to twelve and accounting for up to 40 percent of the global GDP.

The signing of the TPP deal led to mass-scale protests in many of the participating nations with the critics describing the agreement as an attempt to set the rules of the global economy to favor multinational corporations over domestic producers.

This, they warned, would negatively impact the situation of the domestic labor markets of the participation countries.

It favors large multinational corporations which want to impose their regulations on foreign competitors.

US pivot away from Asia

In its push for the TPP, the Obama Administration was also governed by political considerations. Defense Secretary Ashton Carter said that the agreement was meant to strengthen Washington’s alliances with the key Southeast Asian nations.

“Obama planned to create an expanded free trade zone in Asia and the Pacific US companies would benefit from,” Sergei Lukonin, a senior expert on Chinese politics and economics in Moscow, told RT.

“The TPP could also be used by the US as a counterbalance to China. If Washington gives up on its leading role in the region, this would strengthen Beijing’s hand in the ongoing talks on the Comprehensive Regional Economic Partnership,” Lukonin noted.

He added that America’s withdrawal from the TPP would undermine its reputation in the region.

“With the United States out, the Asian nations will have to reconsider their military alliances with Washington,” Lukonin said.

Sergei Silvestrov, a Moscow-based economic expert, said that Washington’s withdrawal from the TPP would complicate its relations with Australia, New Zealand and other countries where the TPP is now being ratified.

Silvestrov added that without the United States the TPP would become meaningless as the US and Japan alone account for a hefty 80 percent of the TPP countries’ trade turnover.

Vietnam has already responded to Trump’s statement by suspending its ratification of the TPP deal, while Australian Prime Minister Malcolm Turnbull remains all set to speed up the ratification process.

Japan Believes Can Persuade US to Keep TPP - Chief Cabinet Secretary
Japan has been alarmed the most by the prospect of a US withdrawal from the TPP. Prime Minister Shinzo Abe pinned much hopes on the deal that would open the US market to Japanese exports. He will try to remedy the situation during an upcoming visit to Washington.

Aside from the negative response from America’s Asian partners, Donald Trump will face serious opposition from transnational corporations. With the globalization process advanced as it is, it will take a country more than just canceling a single agreement to protect its domestic market.

Back to the roots

It still looks like President Trump worries more about America’s economic woes than he does about the political fallout his decision to withdraw from the TPP could create in the world, RT wrote.

During his election campaign he promised to fight unemployment and stand up for the interests of ordinary Americans and now is the right time for him to start practicing what he preached while on the stump.

Meanwhile, Donald Trump is also committed to renegotiating another trade deal, the North American Free Trade Agreement (NAFTA), which was signed by the United States, Canada and Mexico in 1994.