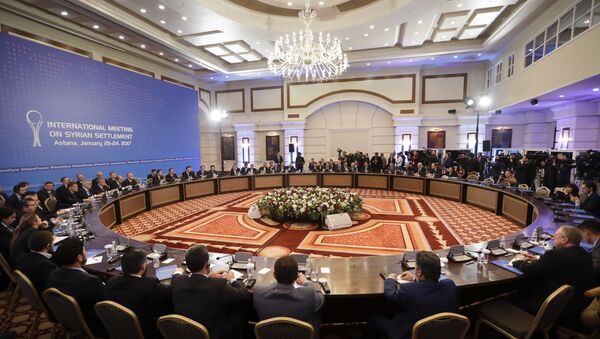 Representatives of President Bashar al-Assad and armed rebel groups fighting against him are scheduled to take part in talks, sponsored by Russia, Turkey and Iran, in a bid to reinforce the ceasefire and pave the way for a peace process aimed at putting an end to the six-year-long war which has claimed more than 300,000 lives.

Here's what you need to know about the meeting.

On December 29, Russian President Vladimir Putin announced that Damascus and several key radical groups reached a ceasefire deal and agreed to hold a round of talks in Astana, the capital of Kazakhstan. Until recently, the negotiations on Syria have mainly taken place in Switzerland, with the next round of Geneva talks expected to take place on February 8.

Astana Talks: Puzzle of Bringing 'Wolf, Sheep and Cabbage' Across the River
There are several important differences between the two formats. Representatives of armed groups fighting in Syria will take part in the Astana talks, whereas Syrian politicians mostly living abroad have largely represented the opposition to the Syrian government in Geneva.

As a result the Astana talks will focus primarily on military issues. The ways of enhancing the fragile ceasefire regime are expected to be the main issue on the agenda. These agreements, if reached, will pave the way for a political settlement of the Syrian crisis.

In addition, representatives of Damascus and the armed opposition are rumored to be willing to meet face to face. In Geneva, the talks on resolving the Syrian conflict were primarily indirect, with the UN representative shuttling between the parties.

The Astana talks "are a major step toward resolving the Syrian crisis," Russian analyst and former diplomat Vyacheslav Matuzov told RT. "The fact that armed groups have arrived [to take part in the negotiations] shows that the first step has been made. In Geneva, the armed opposition refused to come to the negotiating table and [interacted with the delegation from Damascus] through mediators."

The talks in Astana are scheduled to begin at 7 a.m. GMT and will wrap up in 24 hours. Representatives of both sides have arrived in Kazakhstan last week and have already held preliminary talks with diplomats from Russia, Turkey and Iran. Moscow, Ankara and Tehran serve as guarantors of the latest ceasefire agreements.

The Objective of the Astana Peace Talks: 'Syria Should Belong to Syrians'
Bashar Jaafari, Syria's envoy to the United Nations, heads the Damascus delegation. The diplomat has served as Bashar al-Assad's top negotiator at the Geneva talks. Jaafari will be accompanied by Syrian ambassador to Russia Riyad Haddad and Ahmad Arnous, an advisor to the Syrian Minister of Foreign Affairs and Expatriates.

The exact list of armed opposition groups participating in the consultations in Astana has not been unveiled yet, with some militias backing out of the talks. Representative of up to 15 rebel groups, including Jaysh al-Islam, Faylak al-Sham and Jaish al-Mujahideen are expected to come to the negotiating table. Representatives of Free Syrian Army (FSA) and High Negotiation Committee will also participate in the talks.

Mohammed Alloush, who is a former chief negotiator for the High Negotiation Committee, is said to lead the opposition delegation.

Preparations for Peace Talks on Syria in Astana Finished
In addition, Russia, Turkey and Iran have sent their delegations to Kazakhstan. The Russian delegation will include officials from the Ministry of Foreign Affairs and the Ministry of Defense, including special presidential envoy on the Syria settlement Alexander Lavrentiev, Director of the Russian Foreign Ministry's Middle East and North Africa Department Sergey Vershinin and deputy head of the Main Operations Directorate of the General Staff Stanislav Gadzhimagomedov.

What are chances of success?

"All parties understand that Astana is a milestone on the path to the Geneva peace process," Matuzov said, warning against calling the meeting a breakthrough. "However, the sheer fact that it is taking place is a positive development."

Astana Talks: What Common Interests Do Assad, Syrian Armed Opposition Have?
Sergei Demidenko, a researcher at the School of Public Policy of the Russian Presidential Academy of National Economy and Public Administration (RANERA), told RIA Novosti that Damascus and the armed opposition do not have much in common. In addition, Bashar Jaafari will have to negotiate with an array of groups, "some of which are more moderate and some are less so."

The political analyst described the Astana talks as a "preliminary phase" of a more broad-scale event. "In order to hold massive talks one has to understand whether they should be held under current conditions," he explained.

Demidenko further said that it is too early to hold talks in Geneva.

"The situation is extremely complex. It has become more complicated with every passing day. It is not clear with whom [Damascus] should negotiate. It is likely that the talks in Geneva will yield nothing," he said.