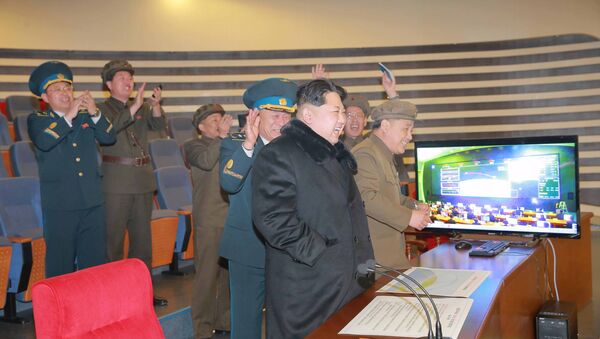 On Monday North Korea threatened to “pour further misery” on Washington. The announcement came on the 49th anniversary of Pyongyang’s 1968 capture of the USS Pueblo intelligence ship.

According to North Korea’s Central TV network, "The US will face a position more miserable than that in the Pueblo case if it forgets that lesson and frantically pursues new ways to provoke war against the north."

This intimidation comes after a Friday White House statement announcing that a "state of the art" missile defense system was being developed specifically to stave off threats from Pyongyang and Iran.

This, along with an increased focus on cyber warfare and benefits for veterans are part President Donald Trump’s plan for "Making Our Military Strong Again."

South Korean Acting President and Prime Minister Hwang Kyo-ahn also spoke of beefing up defence against the DPRK, telling local reporters on Monday, "[North Korean] nuclear and missile capabilities are developing at an unprecedented rate…They are a real and obvious threat. They are also miniaturizing nuclear weapons."

Seoul has called for a Terminal High Altitude Area Defense (THAAD) anti-missile defense system to be deployed immediately. The project has been on hold, even after being approved by Washington last year.

Yonhap News quoted Hwang saying, "I think the government has to do everything to protect the nation and citizens' lives, and THAAD is a necessary defense measure (whose deployment) can no longer be deferred," as "North Korea's nuclear and missile threats are no longer (just) potential."

Hwang added that the South Korean government is in discussions with the White House about how THAAD can be installed in the country "as soon as possible."

Despite sanctions from the United Nations and international calls for denuclearization, the administration of North Korean leader Kim Jong Un has continued developing nuclear weapons in the communist country, firing two unarmed ballistic missiles every month in 2016.

In what has become a common occurrence, Kim brought in the new year touting the progress of a DPRK intercontinental ballistic missile (ICBM). In a televised New Year’s Day address he was quoted as saying, "Research and development of the cutting-edge tech weapons are actively progressing and strengthening our defense capabilities, including last stage preparation of tests for Intercontinental Ballistic rocket launch have been continuously succeeding."

The Korean Central News Agency also cited remarks by him, "unless the US and its vassal forces stop nuclear threat and blackmail and unless they stop the war exercises which they stage right at our noses under the pretext of annual exercises, the DPRK would keep increasing the military capabilities for self-defense and preemptive striking capacity with a main emphasis on nuclear force."