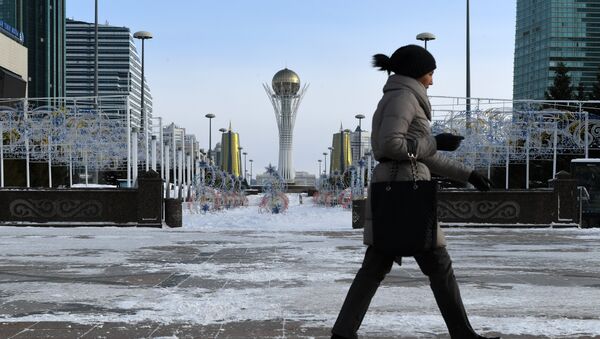 The preparations and first consultations aiming to create an atmosphere conducive to the main round of the intra-Syrian talks in Astana have finished.

MOSCOW (Sputnik) — All the participants of the negotiations that will start on Monday have arrived to the Kazakh capital. The talks, if successful, could signify the new stage of solving the armed conflict in Syria that started almost seven years ago.

The main round of the negotiations is expected to begin on Monday at 1 p.m. local time (07:00 GMT) and to finish at the same time on Tuesday.

De Mistura Calls Trilateral Meeting in Astana Important for Syrian Settlement
The representatives of Iranian delegation headed by Iran's Deputy Foreign Minister for Arab-African Affairs Hossein Jaberi Ansari arrived at the Mariott hotel, where the Russian delegation is staying, at about 5 p.m. (11:00 GMT) on Sunday. In about 15 minutes their discussion with Russian delegation head Alexander Lavrentiev and Director of Middle East and North Africa Department in the Foreign Ministry Sergey Vershinin was joined by Turkish Deputy Foreign Minister Sedat Onal and his colleagues. The consultations were held behind closed doors and lasted more than five hours.

According to Minister-Counsellor of the Russian Embassy to Kazakhstan Alexander Musienko, the talks were "going difficult, but the negotiators must be given time to fulfill their mission."

Musienko also said that the delegations of Russia, Iran and Turkey were working on the final draft of the agreement and added that the Russian side was intending to do everything possible to reach consensus.

Later in the day, the Russian delegation had a preliminary meeting with UN Special Envoy for Syria Staffan de Mistura and his deputy, Ramzy Ezzeldin Ramzy, which lasted about an hour.

"Arrangement of the meeting of the three countries who have influence on the fighting sides is an important one. If that can stabilize the cessation of hostilities — that is what Syrians are looking for," de Mistura said after the meeting.

The Russian delegation also met with Bashar Jaafari, the head of the Syrian government delegation to Astana, who later told Sputnik that further consultations between different delegations were required to reach common ground.

According to Ansari, no agreement has been reached yet regarding the direct talks between the Syrian government and the opposition.

Russian Delegation to Astana Holds Meeting With De Mistura, Ramzy
Ansari added that he was optimistic about Syrian settlement after trilateral consultations with Russia and Turkey.

Lavrentiev said that Moscow was doing its utmost to bridge the distance between the participants of the upcoming negotiations.

"In general, we are looking at the event set for tomorrow with some optimism as it is necessary to give the peace process a chance," Lavrentiev said.

The Russian delegation head stressed the unique nature of the talks that included Syrian government and opposition, but declined to comment on the probability of the direct talks.

Abdulhakim Bashar, the member of the council of Syrian High Negotiation Committee (HNC) told Sputnik that the ceasefire had to be nationwide but should not refer to the Islamic State terrorist group, outlawed in Russia and many other countries.

"We think that the ceasefire must be nationwide but not including the terrorist organizations like the Islamic State or Nusra Front, there must be guarantees of its abidance and sanctions for its breach. These are three main points along with the separation of the zones of contact," Bashar said.

Bashar added that the humanitarian issues, such as the medical and humanitarian aid delivery and the liberation of the dissidents, had to be outlined in the final agreement.

According to Kazakh Foreign Ministry, the heads of the delegation of the Syrian government and the opposition were optimistic about the upcoming talks.

"The heads of both delegations thanked the Kazakh government and the nation for the promotion of peace settlement of the Syrian turmoil, providing great infrastructure for the international meeting," the ministry's statement read.