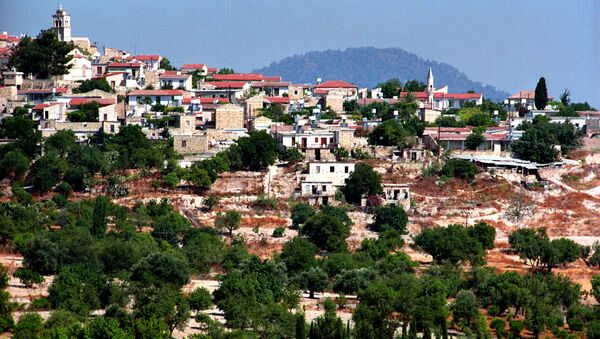 © Sputnik / Boris Babanov
/
Go to the photo bank
Subscribe
The Turkish community in Cyprus is skeptical about the ongoing negotiation process, aimed at finding a compromise on the Cyprus Republic's reunification.

UN Special Adviser Announces Successful End of Conference on Cyprus Reunion
According to Sami Dayioğlu, former Minister of Agriculture and Natural Resources in the self-proclaimed Turkish Republic of Northern Cyprus, the Turkish community residing on the island doesn't see the existence of real prospects for the settlement of the dispute as there are a number of serious problems which have to be resolved first.

In an interview with Sputnik Turkey, Dayioğlu said that the main disputed issues are the possible withdrawal of guarantees ensured by the three guarantor countries — Greece, Turkey and the United Kingdom — as well as territorial problems.

"The main problems that exist today in the Cyprus negotiations are connected with guarantees and territories. In the current circumstances the prospect of the abolition of guarantees causes concern in the Turkish Cypriot community," the official stressed.

"Today we are witnessing how nationalist sentiment is growing in the southern part of the island. Earlier, the ultra-right National People's Front (ELAM) was quite small, but today they are represented in the parliament. Given this trend in the political life of Cyprus, the Turkish Cypriot community calls for the maintenance of existing guarantees. If the Greek Cypriot side really wants to settle the issue, it must respond to the aspirations of the Turkish Cypriots and eliminate such threats," he added.

The Cyprus Republic became divided back in 1974. An attempted coup d'état organized by Greek Cypriot nationalists which sought to reunify with Greece prompted a Turkish military invasion of the island. As a result the so-called Turkish Republic of Northern Cyprus was established. The entity has been recognized only by Turkey, while the international community condemned the move.

The status-quo on the island is ensured by guarantor countries — Greece, Turkey and the United Kingdom. Britain plays an important role as it ruled Cyprus until its independence in 1960, and has military bases there.

However, Dayioğlu believes, that the British military presence on the island is another great concern in the current negotiations.

"The current process involves not only Cypriots, but also the guarantor countries, which affect the situation and have their own interests in the region that often contradict those of the Cyprus Republic. It is unclear what position Greece and Turkey will take. It is also unclear what will happen to the territories under the control of Great Britain. Let's see if London is ready to give up its bases on the island for the sake of the peaceful coexistence of Cyprus' residents," the politician stated.

"If we are talking about a sovereign and independent Republic of Cyprus, there shouldn't be any British military bases on the island," he added.

Erdogan Keeps Troops in Cyprus to Get Support on Constitutional Reform Vote
On January 9, Cyprus reunification talks started in Geneva with the participation of Turkish Cypriot leader Mustafa Akinci and President of Cyprus Nicos Anastasiades. Three days later the negotiations were joined by guarantor countries — Greece, Turkey and the United Kingdom, as well as the European Union.

After a series of futile attempts to reach a compromise on the Republic's reunification the negotiations were resumed in February 2014. Still, in November 2016, they broke up because of a difference of opinions on territorial issues.