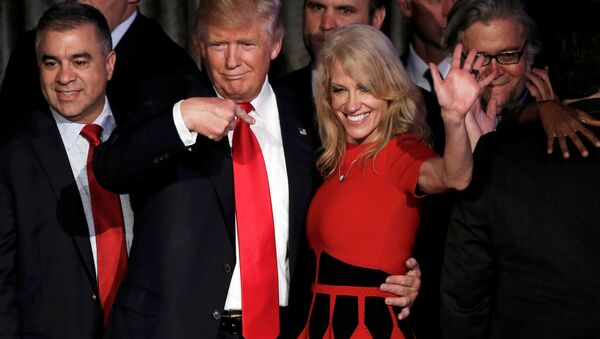 © REUTERS / Mike Segar
Subscribe
International
India
Africa
President Donald Trump’s aide Kellyanne Conway dismissed the Women’s March on Washington on Sunday, saying she didn’t understand why so many people across the globe took to the streets after Trump’s “uplifting and unifying” inauguration speech.

Conway told ABC "This Week" host George Stephanopoulos that she "didn't see the point" of participating in the major demonstrations on the day after Trump officially took office. The country made the crucial decision in November, and now is the time to unite behind a new president, she said.

"We certainly respect people's First Amendment rights," she noted in the interview. "But I frankly didn't see the point. I mean, you have a day after he's uplifting and unifying, and you have folks here being on a diatribe where I think they could have requested a dialogue. Nobody called me and said, ‘Hey, could we have a dialogue?'"

The counselor also condemned celebrities for commenting on the event using explicit language and making inflammatory statements. For instance, Madonna said during a speech at the march that she "thought an awful lot about blowing up the White House."

Trump Stresses Importance of US-Israeli Military Cooperation - White House
"You have a very prominent singer who's worth hundreds of millions of dollars not going over to a woman's shelter here in DC to write a check, but instead saying that she thought of, quote, ‘Burning down the White House,'" Conway said.

The singer, who supported Hillary Clinton during the 2016 presidential election in the US, said that she was "outraged" in the wake of Trump's swearing-in and that the march represented the beginning of a revolution.

UK's May Vows to Speak About Importance of NATO With Trump
She added that, ironically, it was President Trump who won the majority of the white female vote during the election, and that those voices should be respected.

"Twenty-nine to 30 million women voted for Donald Trump," she stressed.

About 2 million people in dozens of countries across the globe flooded the streets to march for human rights on January 21. While some protesters said they were alarmed by the rhetoric of the past election cycle in the US and wanted to send a message to the government, others insisted that the marches shouldn't be regarded as anti-Trump but rather as an attempt to highlight various human rights issues.