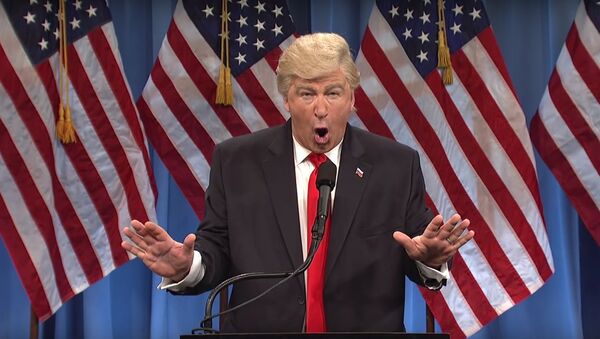 Stephen Baldwin told the Post that his brother's impression was "funny, but the timing of it is no longer funny," adding that now is not the time to mock the new president.

The actor emphasized that many Americans "quietly voted" for Trump because they believed in him, and that the president should be given the "opportunity to succeed and unite the country."

Trump's Press Secretary Slams 'Shameful and Wrong' Reports on Inaugural Crowd
Alec Baldwin, whose impression of the president has caused an uproar and brought in tens of millions of hits to the comedy program's YouTube channel, skipped out on Saturday night's live recording, despite promising to return to the role following Trump's inauguration on Friday.

On Friday night, Baldwin channeled Trump, sans the wig and makeup, at a protest in New York City, flanked by other Hollywood stars. He praised the estimated 20,000-strong crowd at the event, saying that the city's residents have shown that "New Yorkers never lay down."

Baldwin began impersonating Trump during SNL's coverage of the 2016 presidential election, presenting an exaggerated version of first candidate, then President Trump. The show has highlighted Trump's gaffes, flubs and flaws, and covered many scandals, from his 'grab em' by the p***y' comments to allegations that he is a 'Russian agent'.

Despite the impression's popularity and acclaim from critics, Trump supporters and President Trump himself have criticized it in the past. Trump has repeatedly said that his main gripe with the impression is that is "totally biased," "one-sided" and "always a complete hit job."

I watched parts of @nbcsnl Saturday Night Live last night. It is a totally one-sided, biased show - nothing funny at all. Equal time for us?

.@NBCNews is bad but Saturday Night Live is the worst of NBC. Not funny, cast is terrible, always a complete hit job. Really bad television!

A comedy institution in the US, SNL has been known for lampooning American politicians since its debut in 1975. However, critics of Baldwin's Trump impression have complained that it goes overboard, turning what is supposed to be an exaggeration and lampoonery into outright mockery and derision.