Manuel Valls Vows to Protect France From Right, US, Russia 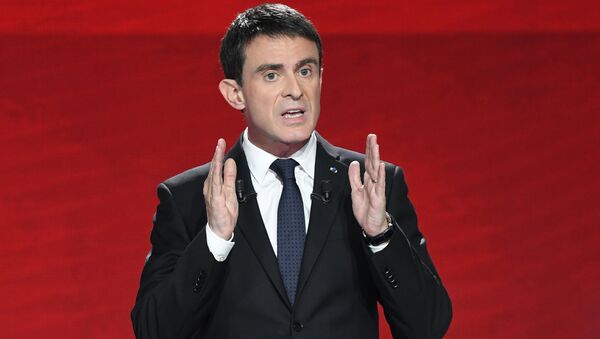 French former Prime Minister Manuel Valls, who passed through to the second round of the Socialist Party (PS) presidential primaries, promised to protect France from the conservatives, the far-right, Russia and the United States.

PARIS (Sputnik) — In the first round, Valls received 31.24 percent of the votes, falling behind former Minister of Education Benoit Hamon and his 36.12 percent.

"I refuse to desert the French facing the far-right who will destroy our country, the right of Francois Fillon, harsh, liberal as never before and conservative, facing the America of Donald Trump, the Russia of Vladimir Putin," Valls said late on Sunday.

France's Montebourg Calls to Vote for Hamon in 2 Round of Socialist Primaries
The relationship between Russia and the European Union soured over the EU allegations of Russian involvement in the Ukrainian conflict, which Moscow has repeatedly denied, and the reunification of the Crimean peninsula with Russia, done through a referendum whose legitimacy the European Union refuses to recognize. Brussels and Washington have introduced a few rounds of sanctions against Moscow, but a number of politicians and businessmen from the EU members states have spoken against these economic measures, which were hurting both sides.

On January 17, French presidential candidate from the far-right National Front Party, Marine Le Pen, told Izvestia newspaper that, if elected, she would recognize Crimea as part of Russia and restore the relations between Russia and France.