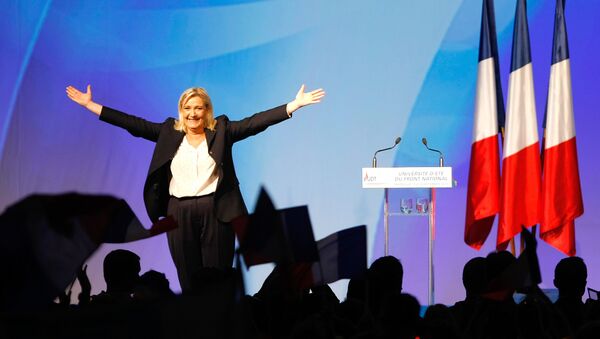 The leader of French far-right National Front party and a presidential candidate Marine Le Pen said at the Freedom for Europe conference that 2017 would be the year of "awakening" for the continental Europe.

KOBLENZ (Sputnik) — On Saturday, Le Pen took part in a conference of Europe of Nations and Freedom, a far-right group within the European parliament, which includes members of National Front, Freedom party of Austria, Alternative for Germany, Dutch Party for Freedom and a few other parties with similar political views.

France's Right-Wing FN Party Head Le Pen Urges End to ‘Superpower’ of EU
Le Pen noted that Anglo-Saxon countries had had their awakening already, referring to the United Kingdom's decision to leave the European Union and the United States voting to choose Donald Trump as the president.

"The first serious strike at our past, which will result in domino effect, is Brexit," French politician said.

Le Pen said that the present was the time of change, with the old world giving way to the new one.

"I am certain that 2017 will be the year of awakening for the continental Europe," Le Pen said.

National Front leader added that this awakening was a matter of when, not if.

Le Pen said that the European elites were against the changes, comparing them to priests and the European Union to religion.

"One is not allowed to think alternatively. They suppress opposition views, prohibit any criticism of their system. They have become real dogmatists and anti-democrats," Le Pen said.

According to the French presidential candidate, people in Germany, Italy, Spain and other European countries were experiencing the tyranny, including the information war.

"In France, they are lying about Germany, in Germany about the United Kingdom, and so on… But when the people will understand that they are not as different as they are being told, that they share similar interests, the European Union will be over," Le Pen said.

EURO AS CHAIN, NOT CONNECTION

Le Pen spoke about the problems that arise because of the single currency that "chains, not binds" countries together.

"[Euro] forces all the European Union member states to carry out the same economic policies," the National Front leader said.

IMF Warns of Possible Disruptions in Global Economy in 2017
Le Pen stressed that she was not urging all countries to reject euro, but a choice by any country to do so should be respected.

"Every country, if it wants to leave the eurozone, should be necessarily given the opportunity to do that," Le Pen said.

The French politician added that the membership of the eurozone could benefit some countries, but was destructive for French economy.

The French presidential candidate criticized forcing single currency on all countries, regardless of their particularities.

Hollande said he would not run for president in 2017, whereas Merkel announced her candidature for 2017 elections.

Le Pen criticized Hollande for his lackluster involvement in solving the conflict in Ukraine in the Normandy Four format.

"There is no risk that I will continue the diplomatic policy of Hollande, if I become the president of France, because it is non-existent. Mr. Hollande was absolutely non-existent in the Ukrainian conflict," Le Pen said at a press conference.

The National Front leader said that conflicts between countries had to be solved through diplomacy.

Off to Greener Pastures: Can Hollande Become the Next EC President?
"We will not find a solution [to the Ukrainian conflict] until we gather all the parties for the negotiations," Le Pen said.

The French far-right leader reproached Merkel for her migration policy.

"In France, Merkel is hailed as the humanitarian heroine… But the residents of [Germany] have not been asked their opinion on the country's migration policy, whether they are satisfied with it… Because if they are asked, we will see that this migration policy is an everyday disaster," Le Pen said.

The conference itself exhibited a welcoming atmosphere with long applause, flags and a general pleasant feeling of unity, but the rest of the city was skeptical about the euro-skeptics, if not borderline aggressive.

Le Pen, Fillon, Macron Likely to Win 1st Round of French Presidential Election
A small protest meeting of about 150 people was held at the town's central railway station ahead of the conference. The crowd, mostly made up of young people, sang and shouted the slogans denouncing the conference.

On Saturday morning, a more large-scale demonstration took place. At least 3,000 people participated in the march, with many activists chanting slogans that accused the conference attendees of Nazism. Many police units were brought in to ensure the security. There have been no reports of arrests or riots.