Trump's Speech: What Does the Future Have in Store for America? 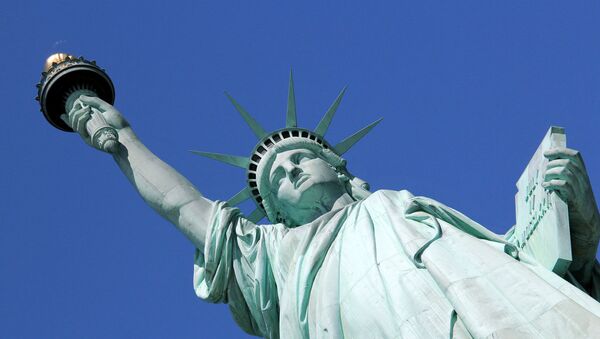 Donald Trump's rise to power has ushered in a new era of US national politics, experts say. Trump's speech has become a shining example of US presidential rhetoric. However, it appears that US elites will see a painful redistribution of spheres of influence within the government under Trump.

Donald Trump's inauguration speech was in every respect a shining example of US presidential rhetoric, Valeriy Garbuzov, Director of the Institute for US and Canadian Studies at the Russian Academy of Sciences, told RIA Novosti.

"In general, [this speech] is indeed a model of presidential rhetoric, well thought-out  and 'well calibrated,' which most US presidents are famous for," Garbuzov said.

"It appears that Trump put his heart and soul into it," he added. 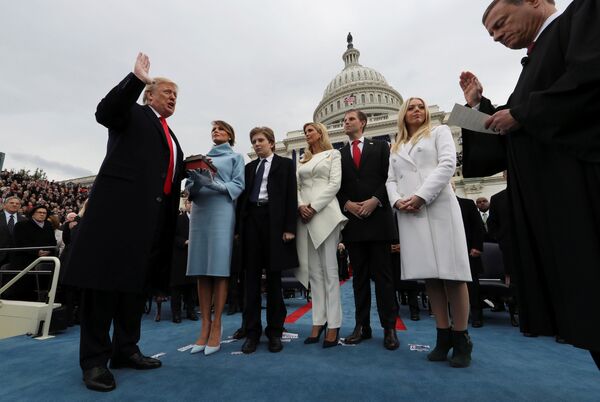 U.S. President Donald Trump takes the oath of office as his wife Melania holds the bible and his children Barron, Ivanka, Eric and Tiffany watch as U.S. Supreme Court Chief Justice John Roberts (R) administers the oath during inauguration ceremonies swearing in Trump as the 45th president of the United States on the West front of the U.S. Capitol in Washington, DC, U.S., January 20, 2017
© REUTERS / Jim Bourg

A New America? How US Policy Could Change Under Donald Trump
Although the 45th US President did not say anything that differed sharply from his election statements, there are several points that deserve special attention, according to the academic.

First of all, Trump's speech was primarily addressed to the ordinary, "forgotten" people of America.

The academic highlighted that Trump has pitted the people against the US establishment, which, according to the President "flourished" while ordinary Americans "did not share in its wealth."

"That all changes — starting right here, and right now, because this moment is your moment: it belongs to you," he stressed.

Regarding foreign policy, the US President highlighted the necessity to shift America's focus to its own domestic problems and needs; to protect its borders rather than spread itself thin by fighting on distant shores.

What is more important, according to Garbuzov, is that Trump has drawn attention to "the right of all nations to put their own interests first."

"We will seek friendship and goodwill with the nations of the world — but we do so with the understanding that it is the right of all nations to put their own interests first," the US President said.

"We do not seek to impose our way of life on anyone, but rather to let it shine as an example for everyone to follow," Trump added.

Ombudsman: Russia-US Business Ties Can Develop Under Trump Despite Sanctions
At the same time, Garbuzov believes that there are a number of contradictions hidden in Trump's "plan" voiced at his inauguration.

For instance, the Russian academic finds it strange that Trump decided to rip up the Trans-Pacific Partnership (TPP) project, given his tough stance toward Beijing. The TPP has long been regarded by the Obama administration as powerful leverage against China.

For his part, Igor Kryuchkov of Gazeta.ru suggested that Trump's speech has become a sign of the upcoming repartition of spheres of influence within the US government.

"The bottom line is: Trump's rise has ushered in a new era for the US: from now Washington won't rule the country, since the country will rule Washington. Judging by the reaction of Congress and the public, the American establishment will face a painful redistribution of spheres of influence [within the government]," the journalist assumed.

David Azerrad of the Heritage Foundation also believes that Donald Trump is determined to challenge the US establishment. Therefore, the US President is seeking to win the American people's support, Azerrad suggested in an interview with Gazeta.ru.

Russia's presidential business ombudsman Boris Titov doesn't quite agree with such a stance. Speaking to the media outlet, Titov highlighted that contrary to popular belief, Trump maintains close ties with the US financial establishment.

"Most of the financial elite support Trump. Those who pose the challenge [to the US President] are the political elite," he noted.

Sputnik contributor Martin Sieff has called attention to the fact that Trump vowed to "restore unity" across the United States. Given the post-presidential campaign tensions which continue to simmer in American society, the vow has taken on a new significance. 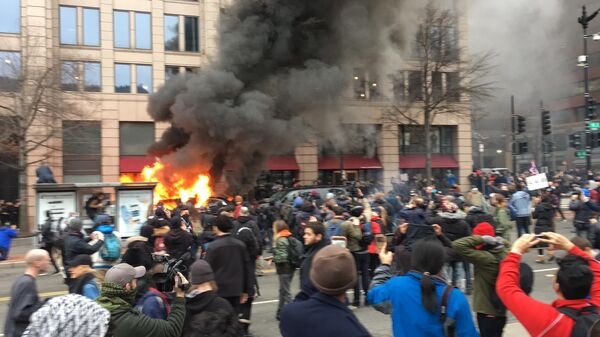 "When you open your heart to patriotism, there is no room for prejudice. The Bible tells us, 'How good and pleasant it is when God's people live together in unity,'" Trump underscored.

According to Alexei Pushkov, Senior member of the Federation Council, the upper house of the Russian parliament, a new era has definitely begun for the US with Trump taking office.

​"Bright politician — powerful speech. A politician of a new type — a speech of a new time," Pushkov wrote on Twitter. The politician wished luck to the new American President and warned that there will be those who will try to stand in his way.

On January 20, Trump was sworn in as the 45th President of the United States.