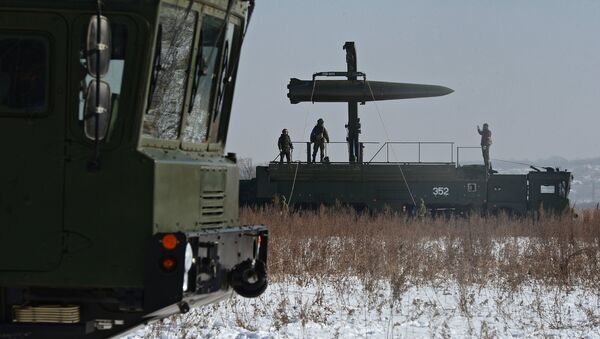 Kremlin spokesman Dmitry Peskov stated that Russia cannot withdraw missiles in its western Kaliningrad region without knowing that plans for creating entire missile system are to be abolished on the European continent.

MOSCOW (Sputnik) – Russia is going to keep its missiles in its western Kaliningrad region as NATO is working on creating an “entire missile system” in Europe, Kremlin spokesman Dmitry Peskov said in an interview with the BBC broadcaster.

“It is a very complicated issue. You cannot just withdraw those missiles from Kaliningrad without knowing that plans for creating entire missile system are to be abolished on the European continent,” Peskov said.

Russia
Russia Made No Secret of Sending Iskander Missile Systems to Kaliningrad - MoD
On October 8, 2016, official representative of the Russian Defense Ministry confirmed the information on relocation of Iskander missile complexes to the Kaliningrad region, adding that it was a part of routine drills aimed improving missile forces capabilities.

On October 12, Russian Foreign Minister Sergey Lavrov said in an interview with the CNN broadcaster that by placing weapons in Kaliningrad, Russia acts on its territory, while Washington placed weapons in Eastern Europe, which is not US territory.