Off to Greener Pastures: Can Hollande Become the Next EC President? 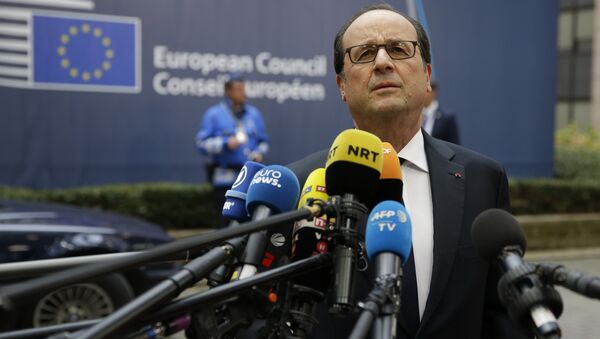 © AP Photo / Alastair Grant
Subscribe
International
India
Africa
Having made it clear that he does not intend to run for president during the upcoming elections, French leader Francois Hollande is now apparently seeking a high-level office in the EU government.

Hollande on Trump's NATO Remarks: Europe Needs No Policy Advice From Abroad
Citing sources close to the French leadership, Le Parisien suggests that rather than continue to engage in politics at home, Hollande may now have set his eyes on the office of president of the European Council.

It should be noted that the term of the current head of the European Council, former Polish Prime Minister Donald Tusk, is set to end in May 2017, which is roughly the same time when Hollande will conclude his tenure as the President of France.

Emmanuel Dupuy, professor of geopolitics and president of the Institute for European Perspective and Security (IPSE), told Sputnik France that while these reports appear to be true, a French president whose term is about to end usually starts seeking a position at least equal to the one he held previously, and Francois Hollande is extremely unlikely to succeed in this endeavor.

"While these rumors keep coming up, I doubt that he stands a chance. First and foremost, the new president must endorse his candidacy, and if Francois Fillon wins, he won’t back Hollande; he’d probably endorse Nicolas Sarkozy instead," he said.

He pointed out that since "the three most important offices in the EU" are being occupied by rightist politicians, the balance in Europe demands that at least one them was replaced by a non-conservative. However, even this fact may not help Hollande in his quest for EC presidency due to one key factor.

"But we keep forgetting that most political leaders in 28 EU nations belong to the rightist camp. Therefore, I see no real possibility for Francois Hollande to claim that office," Dupuy surmised.