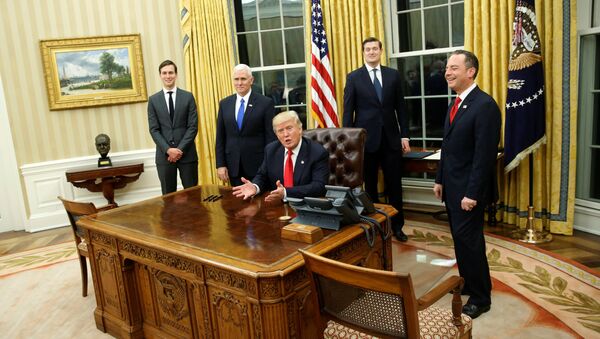 US President Donald Trump has returned the bust of former British prime minister Winston Churchill to the Oval Office, US media report.

WASHINGTON (Sputnik) – The bust, removed from the office by former US leader Barack Obama in 2009, was spotted by reporters on Friday when Trump was signing executive orders after his inauguration, The Hill newspaper said.

When I met Trump as President elect I asked him to return the Churchill bust to the Oval Office. First day: pic.twitter.com/zZ4TBppeuZ

​Back when Churchill’s bust was removed, the White House said it was in order to make room for the busts of Martin Luther King Jr. and former US president Abraham Lincoln.

British Prime Minister Theresa May could become the first foreign leader to meet with president Trump. The Telegraph reported citing anonymous sources on Friday that May was planning to fly out to Washington DC next Thursday.