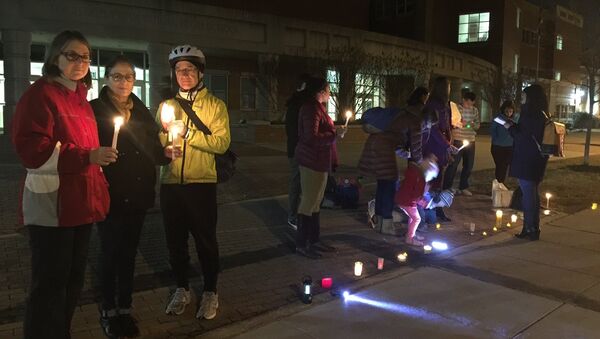 Dozens of people participated in a candlelight demonstration in the US capitol of Washington, DC less than a day before President-elect Donald Trump is sworn in as the 45th President of the United States.

WASHINGTON (Sputnik) — The peaceful protest was held along 16th street, which is one of the city’s historic and central streets from 6 p.m. to 7 p.m. (11 p.m. to 12 a.m. GMT) on Thursday. People with lit candles were standing on both sides of the street, from its very beginning at the border with the state of Maryland down to the White House.

Carol, one of the event’s participants, told Sputnik that the demonstration was originally church-based, organized by several churches located on the several miles long street, but then spread throughout the community.

"On 16th street from Silver Spring to the White House people are standing with candles to shine a light for peace and justice to the White House," Carol said. "These candles symbolize hope and peace for the future."

Carol noted that she came out on the evening before the inauguration to show her support for unity and peace.

Trump Vows to Unify US, Make Inner Cities Great Again
"I don’t believe that this new president is really pro-unity," she claimed. “There is such division in this country between the parties, between the public that we’ve never seen before in any election.”

Another participant of the demonstration Nancy Garruba told Sputnik that the demonstrators came out to resist what they ‘’see happening with the election of Trump, with Trump about to become President tomorrow."

"We are resisting what we see as Trump’s effort to erode our democracy, to erode civil liberties, to discriminate against minorities, to take away freedom of the press," Garruba explained. "It’s a vigil for democracy… It’s a metaphor. You hold a vigil when something is dying or someone is sick, and our democracy is sick."

Most participants told Sputnik they refuse to even pay attention to Friday’s inauguration festivities, and Garruba was no exception.

“We are boycotting tomorrow’s inauguration,” Garruba said. “We are not going to turn our television on because we don’t want the ratings to show that more people are watching.”

Chris Hornig, Washington DC resident, told Sputnik that he is concerned about Trump’s plans to cut funding for vital things like education and healthcare.

"We are very concerned about Trump aligning with the conservative republicans to cut funding to issues that are important to us, to eliminate abortions, healthcare," Hornig explained. "He [Trump] has no particular policy of bringing the country together and thinking thoughtfully what we need to move forward."

Demonstration participant Terry Thielen told Sputnik that she joined the event because she was concerned about "Trump’s conflicts of interest around the world and how that’s also going to play into his decision-making."

Thousands Rally in New York on Presidential Inauguration Eve
"In this country we believe everybody has to follow the same rules and are all bound by the same laws, and it appears that Mr. Trump doesn’t believe that. He thinks that he is above all of that," Thielen remarked.

Earlier on Thursday at an inaugural concert at the Lincoln Memorial in Washington, DC, Trump said his administration would unify the country and work to make America great again for all Americans, including those in the inner-cities.

On Thursday morning Trump left New York for Washington, where he will be sworn in as the 45th president of the United States on January 20.