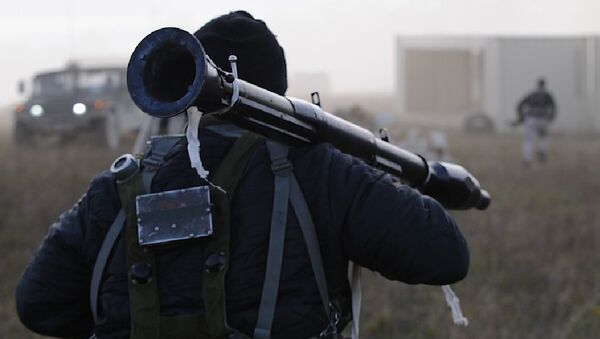 More than 300 foreign mercenaries are engaged on Kiev's side in the Lugansk Region, a senior Lugansk People's Republic commander said.

LUHANSK (Sputnik) — About 300 foreign mercenaries fight on the side of Kiev in eastern Ukraine's Lugansk Region, Chief of Staff of the People’s Militia of the Lugansk People’s Republic (LPR) Oleg Anashchenko said Friday.

"According to our records, there are over 300 foreign mercenaries in the Lugansk Region who serve in different units," Anashchenko said.

He noted that the Kiev authorities resorted to such measures due to the Ukrainian military's unwillingness to carry out certain "criminal" orders.

Low morale of the Ukrainian army also prompts Kiev to search for help from abroad, according to Anashchenko.

Freudian Slip? Poroshenko Speaks of 'Temporary Ukrainian Occupation' in Donbass
The Donbass conflict erupted in April 2014 as a local counter-reaction to the West-sponsored Maidan coup in Kiev that had toppled legitimate President Viktor Yanukovych in February. Residents of the Donetsk and Lugansk regions held independence referendums and proclaimed the People's Republics of Donetsk and Lugansk. Kiev has since been conducting a military operation, encountering stiff local resistance. According to the UN data, over 10,000 people died as a result of the conflict.

In June 2016, Ukrainian President Petro Poroshenko ordered the General Staff of the Ukrainian army to publish data on the number of foreigners who are fighting on Kiev's side in Ukraine's east.