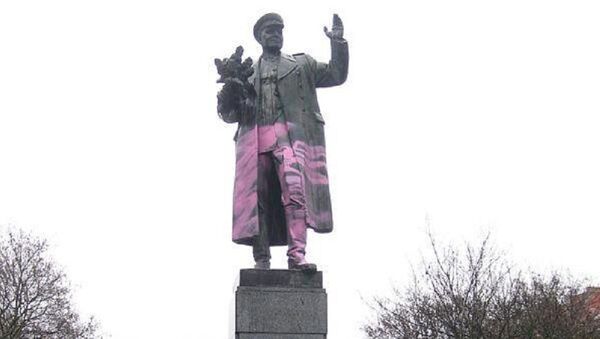 © Photo : Twitter/@NotMattBellamy
Subscribe
Moscow is deeply worried by the fact that in some "advanced democracies" Nazism is being rehabilitated and history rewritten for the sake of short-sighted interests, the Russian foreign minister said.

MOSCOW (Sputnik) — Moscow is concerned with the rehabilitation of Nazism and destruction of the Soviet Red Army monuments in the European Union, Russian Foreign Minister Sergei Lavrov said Friday.

"Unfortunately, today we have to admit that in many countries, including those that call themselves advanced democracies, in fact, the rehabilitation of Nazism, the glorification of the Nazis and the activities of their collaborators and, in general, the rewriting of history in the selfish short-term interests, is underway," Lavrov said at the opening of an exhibition on Holocaust.

He added that the "disgraceful war of destruction and desecration of Red Army monuments across Europe was especially concerning," as such actions "are not only deeply immoral, but contrary to the UN Charter and other international instruments."

Russia to Continue Resisting Attempts to Revise Nuremberg Trials Decisions
In March, Poland's Institute of National Remembrance announced that the Polish authorities were planning to demolish about 500 monuments to the Soviet Army soldiers.

In December, the authorities of the Polish city of Lancut replaced a Second World War monument, devoted to the heroism of Soviet soldiers, with a Christmas tree.

sapper
20 January 2017, 15:39 GMT
000000
The same in happening in the US South , regarding Confederate monuments. They haven't attacked cemeteries yet, but that's coming. This is a Deep State effort.It is part of destroying the culture and history of western nations, as part of the attack on civilization of the West.
jas
20 January 2017, 17:24 GMT
000000
Newsfeed
0
New firstOld first
loader
LIVE
Заголовок открываемого материала
Access to the chat has been blocked for violating the rules . You will be able to participate again through:∞. If you do not agree with the blocking, please use the feedback form
The discussion is closed. You can participate in the discussion within 24 hours after the publication of the article.
To participate in the discussion
log in or register
loader
Chats
Заголовок открываемого материала
Worldwide
InternationalEnglishEnglishMundoEspañolSpanish
Europe
DeutschlandDeutschGermanFranceFrançaisFrenchΕλλάδαΕλληνικάGreekItaliaItalianoItalianČeská republikaČeštinaCzechPolskaPolskiPolishСрбиjаСрпскиSerbianLatvijaLatviešuLatvianLietuvaLietuviųLithuanianMoldovaMoldoveneascăMoldavianБеларусьБеларускiBelarusian
Transcaucasia
ԱրմենիաՀայերենArmenianАҧсныАҧсышәалаAbkhazХуссар ИрыстонИронауОssetianსაქართველოქართულიGeorgianAzərbaycanАzərbaycancaAzerbaijani
Middle East
Sputnik عربيArabicArabicTürkiyeTürkçeTurkishSputnik ایرانPersianPersianSputnik افغانستانDariDari
Central Asia
ҚазақстанҚазақ тіліKazakhКыргызстанКыргызчаKyrgyzOʻzbekistonЎзбекчаUzbekТоҷикистонТоҷикӣTajik
East & Southeast Asia
Việt NamTiếng ViệtVietnamese日本日本語Japanese中国中文Chinese
South America
BrasilPortuguêsPortuguese
NewsfeedBreaking
19:46 GMTWHO: Data Insufficient to Conclude Omicron More Dangerous Than Delta
19:02 GMTUS Reportedly Sends Two Military Convoys to Syria Consisting of Over 100 Vehicles
18:24 GMTTaiwan Scrambles Jets to Fend Off 27 Chinese Military Aircraft
18:09 GMTBelarusian Security Council Says Kiev Stirring Up Migration Issue to Get Money From West
18:03 GMTPresident Ramaphosa Delivers Speech on South Africa's COVID Fight Amid Spread of Omicron Strain
17:52 GMTSouth African Doctor Says 'Mild' COVID-19 Variant Omicron Already 'Seeded' in UK
17:38 GMTPoll: Kamala Harris & Michelle Obama Dems' Top Choices for 2024 Race If Joe Biden Decides Not to Run
17:27 GMTHunter Biden Received 3-Carat Diamond on Top of $10M a Year Deal With Chinese Businessman, Book Says
17:17 GMTWill the Maxwell Trial Expose Epstein's Rich & Powerful Friends or Turn Into Another Cover-Up?
17:12 GMTSouth Africa's Health Minister Unhappy With International Reaction to Omicron Strain
16:32 GMTKremlin: Anti-Russian Campaign Could Be Used to Distract From Kiev’s Possible Military Op in Donbass
16:11 GMTGermany Warns US Congress Nord Stream 2 Sanctions Will 'Damage Transatlantic Unity', Docs Show
15:54 GMTPrince Harry Lashed Out at Prince William Who Asked Him Not to Rush Things With Meghan, Book Claims
15:45 GMTPoland Ready to Help Finance Return of Migrants Stuck at Border With Belarus to Home Countries
15:05 GMTTwo Iranian Seamen 'in Good Health' After Being Rescued by US Navy Ship in Gulf
14:51 GMTThe Omicron Strain: What is Known About New COVID-19 'Variant of Concern'
14:47 GMTAustrian Chancellor Speaks for Proceeding With Nord Stream 2 Pipeline Project
14:43 GMTKyrgyz Lawmaker Detained on Suspicion of Plotting a Coup - Source
14:19 GMTBiden's Attempt at Sending Message of Return to Normalcy Thwarted by New COVID Variant
14:00 GMTMacron Bashed for 'Throwing Toys Out of Pram' as Patel Uninvited to EU Talks on Channel Crossings