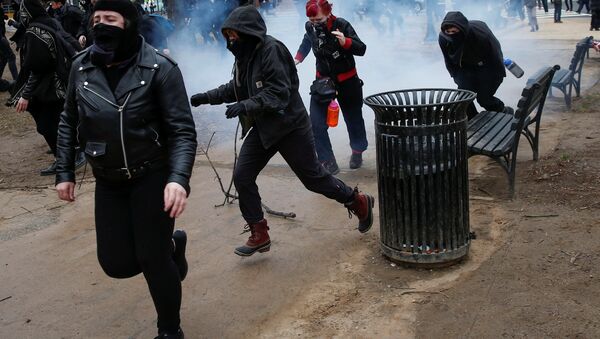 Riot police have formed a wall to block protesters from advancing down K Street in Washington, DC. Stun grenades, pepper spray, concussion grenades, and tear gas have been the primary method of quelling the protests.

Disrupt J20, one of the organizing protest groups, ​​noted that tear gas has been deployed, too.

Amid the chaos, a preacher is "strangely unbothered."

​There's a standoff between police and teenage protesters at 14th and K Streets NW, according to an eye-witness. The scene looked like it could soon become more violent, the witness added. At least 217 individuals have been arrested, a local official confirmed. Protesters hurled rocks and debris at the riot police officers. They came prepared with gas masks.

But a young Trump advocate worked to put it out.

​​Estimates range from 200-1,000 people in this area. Earlier in the day, a group calling themselves "Black Bloc" stormed through the streets of Washington breaking windows and vandalizing vehicles parked on the street. The group shattered the windows of a Bank of American branch and a Starbucks cafe.

​A police squad car had its back window bashed in.

On Friday, the White House announced "the dangerous anti-police atmosphere in America is wrong. The Trump administration will end it." The Trump administration indicated it would offer little sympathy to protesters the next four years. "Our job is not to make life more comfortable for the rioter, the looter, the violent disrupter," the White House states.

​ "Violence will not be tolerated," DC Mayor Muriel Bowser said. Riot police have slowly escalated techniques throughout the day in response to property damage. The groups are still about five or six blocks from interfering with the Inaugural Parade and would have to get through several layers of blockades to disrupt the festivities.

​Mass arrests may still take place if the situation continues to intensify. ​

Trump has emphasized in recent speeches that his presidency is not about him, but the people. "Today's ceremony, however, has very special meaning because today, we are not merely transferring power from one administration to another or from one party to another, but we are transferring power from Washington, D.C. and giving it back to you, the people," Trump said in his inaugural address.

But the "movement" that fueled Trump's victory may very well have sparked an equal and opposite force, to quote Issac Newton's third law. "The revolution starts today," a masked protester told Sputnik.