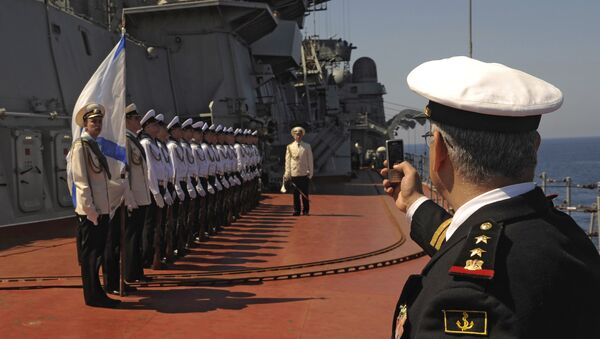 Russia and Syria signed all necessary documents on development and modernization of Russian naval base in Syrian Tartus.

MOSCOW (Sputnik) — Russia and Syria have signed an agreement on development and modernization of Russian naval base in Syrian Tartus as well as the protocol stipulating the conditions for Russian Aerospace Forces’ aircraft deployment in Syria.

The documents, signed on Wednesday, were made public on Friday. Both chambers of the Russian Parliament confirmed to RIA Novosti their readiness to examine the agreement as soon as possible.

In October 2016, the Russian Defense Ministry said it intended to create a permanent naval base in Tartus.

Russian Naval Facility in Tartus Could Be Upgraded to Naval Base in 1.5-2 Years
The agreement is supposed to be in effect for 49 years and to extend automatically for 25-year periods after that.

The document stresses that the agreement is defensive in nature and is not aimed against any other parties.

The deal stipulates that 11 Russian vessels can be present in the harbor of Tartus at once, including the ships equipped with nuclear marine propulsion, provided that nuclear and environmental safety guidelines are respected.

Russia May Simultaneously Deploy up to 11 Warships in Syria's Tartus
Russia promises to send to Syria, at its request, specialists to help restore Syrian warships and will help organize the defense of the harbor of Tartus and help mount search and rescue operations in Syrian waters.

Syria will not make any objections related to the military activities of the base, which will also be beyond Damascus’ jurisdiction.

Syria also pledges to solve any conflicts that may arise if a third party objects to the activities of the base.

This agreement means that the logistics center in Tartus has earned the naval base status.

"This means that in the future the vessels of all ranks and types can be based in Tartus, except aircraft carriers," Adm. Viktor Kravchenko told RIA Novosti.

Putin Approves Decree on Russian Naval Base in Tartus Expansion – Kremlin
According to Kravchenko, the supply of water, fuel and electricity has to be ensured for that, and the berth space has to be expanded.

"It will be necessary to build a battery room to replace submarines’ batteries or to recharge them onshore," Kravchenko said.

The admiral stressed that the security of the base would be the main concern and missile defense systems and air defense systems, as well as coastal missile systems, such as Bal or Bastion, would have to be deployed there.

The Defense Committee of the State Duma, Russian Parliament’s lower chamber, will not take long to examine the agreement on the Tartus logistics center, the deputy head of the committee told RIA Novosti.

"I do not think that ratification will take long. As soon as the documents on this agreement arrive at the State Duma, the specialized committee will begin working on the ratification of the deal," Andrey Krasov said.

The lawmaker noted that the agreement signified Russia’s return to the Middle East as a political player.

"That is only one item in the infrastructure network that will allow Russia successfully fight international terrorism in the region," Krasov said.

Russia, Syria Agree Expansion, Overhaul of Tartus Naval Facility
The Federation Council, the parliament’s upper chamber, may discuss the agreement at its next session on February 1, if the draft has been brought to the parliament and approved by the lower chamber by then, Viktor Ozerov, head of the Russian Federation Council's defense committee, told RIA Novosti.

According to Ozerov, the ratification of this agreement is extremely important as it will help create legal framework for the deployment of Russian military personnel abroad.

Ozerov also noted that, when calculating the number of the vessels that can be based in the harbor, the specialists considered its size and the center’s tasks.

The senator stressed that the base in Tartus is supposed to be a maintenance center for Russian Navy in the Mediterranean rather than a military one.