As Europe Freezes During Winter, Kremlin Gets Blamed for 'Siberian' Cold 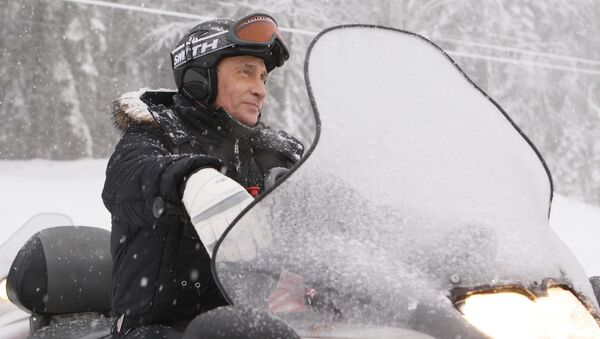 © Sputnik / Alexei Druzhinin
/
Go to the mediabank
Subscribe
International
India
Africa
Europe has recently been hit by a record-breaking cold snap, which has claimed lives, caused traffic chaos and led to power cuts and travel delays. It is said to be the result of strong winds circulating from Russia and Scandinavia, which prompted many Twitter users to joke that Vladimir Putin himself was behind this invading wave of cold.

A record cold wave recently struck Europe with strong winds and powerful storms, claiming lives and causing major disruptions to power supplies and transport in a number of countries, leading to suspended flights and delays among shipping services.

Plummeting winter temperatures are said to be the result of stationary high pressure over Western Europe, resulting in strong winds circulating from Russia and Scandinavia towards Eastern Europe.

This mere fact has prompted many to joke that it was none other than Vladimir Putin himself behind this invading wave of cold.

Sputnik France took a look at trending French tweets to find the most shocking insinuations.

"The coming week inevitably raises the question of Russia's interference in the temperatures expected in our beautiful country," tweeted one of the users.

​Thierry Mariani, French politician and MP, was quick to respond: "Thanks to @Fred_Pichon for highlighting the responsibility of #Poutine (French for Putin) in the cold wave striking France."

​Meanwhile, another user has wondered whether the "agents of the Kremlin" were able to develop a way of destabilizing the climate in response to anti-Russian sanctions.

​"Putin is so strong that he even happens to attack us with a wave of cold," suggests another tweet in the selection.

​"There you go! The cold wave comes from Russia and there is no one cunning enough to say he will stop Putin!" the users go on.

​"A mass of cold air coming from Russia. And Putin will still continue to deny any interference???" one writer wonders.

​One user even suggested that right after sending a wave of cold in advance, Vladimir Putin will appear in person riding a Russian bear.

​Some, however, have gone further, voicing suggestions regarding why Russia had invaded Europe with cold.

​"Perhaps Paris will finally be interested in buying Russian gas and will thus fill the pockets of the Russians, who seem immune to the harmful effects of snow and ice."

Meanwhile, the wave of icy cold seems be easing in France, and President Putin hasn't arrived atop his legendary ursine steed. However, there is still one more winter month to go.