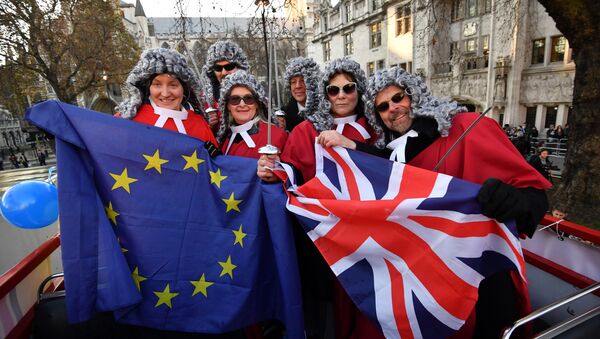 © AFP 2021 / Ben Stansall
Subscribe
UK Prime Minister Theresa May is facing more legal challenges in both British and Irish courts over not just the method of triggering Brexit but also what it actually means, with the latest court case postponed to await the first major judgement due January 24.

The UK Supreme Court is due to hand down its judgement on the question of whether May has the right to trigger Article 50 of the Treaty of Lisbon — formally notifying Britain's wishes to exit the EU — by using the Crown Prerogative or whether she has to cede that right to parliament.

Judgment in Article 50 #Brexit case to be handed down on Tuesday 24 Jan at 9.30am. Details on public access here https://t.co/DnQfsF0fKj

Westminster sources have let it be known they are expecting the judgement to go against May and that parliament will have the final say on the process of triggering Brexit, which will be a political ballgame, depending on what the Supreme Court judgement says.

The political dilemma is that May's preference was to allow her government to trigger the process without having to send the matter to parliament where MPs from different parties will have the opportunity to shape the method of exit.

Central to this is the fact that Scotland and Northern Ireland voted to remain in the EU and the issue could trigger another Scottish independence referendum and throw the Northern Ireland peace agreement into chaos.

However, another case due to be heard January 19 has been put back to early February to await the outcome of the Supreme Court judgement. That case — brought by a number of claimants and originally mooted by think tank British Influence — challenges the government's view that the UK will automatically leave the European Economic Area (EEA) or single market once it exits the European Union.

#TheresaMay says she wants to leave the #SingleMarket. But no politician is above the law. Join the legal fightback: https://t.co/HMID7NCLUq pic.twitter.com/JyE0gvcxsK

​The EEA agreement was first drawn up in 1994 between the EU member states and three countries not in the EU: Iceland, Liechtenstein and Norway.

The claimants argue that the UK will remain as part of the EEA unless article 127 of the EEA agreement is triggered, with an additional claim that legislation will be required before ministers can give notice under article 127.

The case will test the validity of the so-called Norwegian model, which is a scenario whereby the UK leaves the European Union, but remains part of the EEA.

Is Article 50 reversible? A primer on the Dublin case. https://t.co/ZmcEM4P8bd

​As if May's government has not enough law to contend with, British barrister, Jolyon Maugham QC, has brought a case before the courts in Ireland to ask whether a notification under Article 50 can be revoked and whether — by leaving the EU — the UK automatically leaves the European Economic Area.

The intention to go via Dublin is to encourage the Irish courts to make a reference to the Court of Justice of the European Union. Maugham's first question is: after all the negotiations over exiting the EU and agreeing terms on a new relationship with it, would the UK parliament be able to revoke its withdrawal under Article 50 if it does not like the terms of the "exit"?