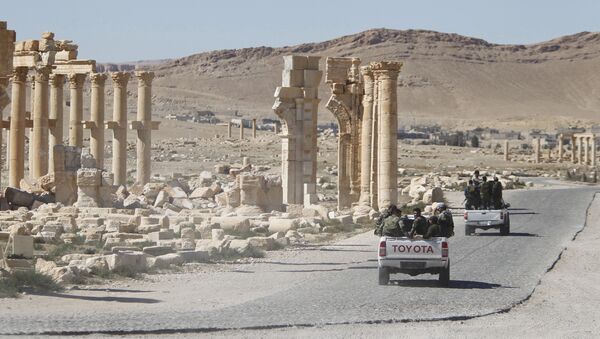 The Russian General Staff said that the Syrian army supported by Russian warplanes launched an operation against Daesh in Palmyra.

The Russian General Staff said that the actions of the US-led coalition in Iraqi Mosul "are mostly reduced to ousting Daesh forces in eastern Syria, which smuggle weapons, explosives, manpower toward Palmyra, Deir ez-Zor, as well as toward the border with Turkey, the city of Al-Bab."

"We have received information confirmed by several sources about the transfer of a big amount of explosives to Palmyra to help Daesh terrorists destroy world historical heritage in the city. Currently, [Syrian] government forces supported by the Russian Aerospace Forces are carrying out an offensive against Daesh in Palmyra," Lt. Gen. Sergei Rudskoy, the chief of the Russian General Staff Main Operational Directorate, said at a news briefing in Moscow.

After Aleppo Syrian Army Likely to Launch Offensive on Palmyra, Idlib
On December 11, Daesh attacked and recaptured Palmyra, which had been liberated from the terrorists by the Syrian Army with the help of Russian warplanes in late-March. The ancient city had suffered for eight months under Daesh's control. Some 4,000-5,000 militants, including hundreds of suicide bombers and armored vehicles, took part in the attack.