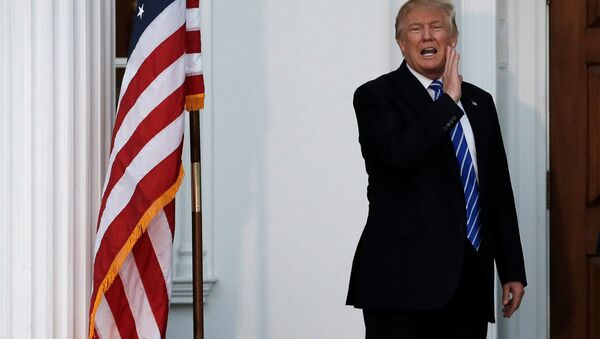 Angus Gallagher
All materials
Brutus Complex: As over 50 Democrats vow to boycott the inauguration and the liberal media strives to delegitimise American freedom, such posturing can only appeal to sociopaths searching for their narcissistic moment of historical vindication.

CNN Prophesizes Trump, Pence Getting Assassinated During Inauguration
No one ever truly believed that American democracy was perfect. But the sabotaging of the transition period and the fissuring of the US intelligence community are the outcomes of a scorched-earth policy spawned from a deadender mentality that simply refuses to defer to democratic values. Such nihilism inexorably messages America’s bloody history of four lethal presidential assassinations between 1865 and 1963.

Arguably, the armed lone fantasist, hopelessly lost in a world inundated with the victim politics of the liberal elite and where fragile self-worth is tallied up by the number of facebook likes has never had a greater incentive to seek not just personal redemption- but the superstar fame of committing what any sane society would consider unthinkable.

And yet by slow degrees and at a subliminal level, the respect for democratic institutions and the values that maintain them are being recklessly eroded to the point where, in the eye of the warped extremist mind at least,- the heinous becomes not only possible, but desirable.

Needless to say, Marcus Junius Brutus, a respected senator, who initiated Caesar’s murder in 44 BC, believed he was acting to save the Roman Republic. Likewise, Abraham Lincoln’s assassin, John Wilkes Booth, reckoned enfranchising the South’s former slaves threatened society and that the only way to prove white lives mattered meant pulling out a gun.

For Lee Harvey Oswald, President Kennedy’s killer, the motives, while nebulous, are perhaps even more nightmarish than some tidy political aim that didn’t plumb the depths of human frailty while breeding a thousand competing conspiracy theories: The 1964 Warren Commission Report suggested that Oswald, a 24-year-old ex-marine and former defector to the Soviet Union, was a social misfit with a grudge against authority.

Moreover, the Report also concluded that Oswald’s ‘Marxism for Dummies’ approach to Communist dialectic had alienated him from not just the Soviet Union, but from his homeland and probably anywhere else he was ever likely to go.

Unyielding arrogance, mental instability, violent narcissism, social rejection- a miasma of broiling factors that lurk behind the outwardly normal façade of the would-be presidential assassin may lie dormant if not activated by a sly political narrative that lauds the act of atrocity as potentially meritorious.

World
Did the NY Times Call Themselves ‘Kremlin Stooges’ in Their WikiLeaks Hit Piece?
While the budding assassin might be sane enough to realize his or her actions might not be immediately extolled, the fact that they can at least be understood is the first step to self justification in the kind of tortured soul that does double duty as the court of history: Such malign pathologies are sure to be drawn to the hysterical debate that rejects Mr. Trump as a ‘Russian stooge’ the way a moth is slowly drawn to a flame.

Still, as with any serial killer, gruesome notoriety is its own reward- though today’s toxic political climate is likely to appeal to those seeking much wider validation than that offered by some obscure subculture: For the kind of deranged fanatic likely to be motivated to go after President Trump, it’s enough that his-her actions will be pondered by liberal professors in the best universities, analyzed by the mainstream media, and duly declared as justified by whatever fringe groups latch on to the same kind of sick moral relativism that equated 911 with American foreign policy in the developing world.

The cruel, self debilitating truth is that it will be all too easy to find liberal intellectuals in America willing to compare President Trump’s assassin to Georg Elser- the humble carpenter who planted a bomb in the Burgerbraukeller in the 1939 plot to kill Adolf Hitler.

Here's How the Trump Presidency Will Play Out
The bipartisan elite’s stubborn strategy of Russophobia and its enabling media frenzy surrounding Mr. Trump’s fully democratic victory, if not directly targeting unstable minds with the precision of a reaper drone, is nevertheless fueling the kind of social instability that might tip those of a certain pathology over the edge: It’s all too easy to imagine that some lone assassin might lunge forth not only armed with a gun- but with the delusional view that President Trump was installed by the Russians, that he is about to declare genocide in the Middle East, or that, in the quasi-religious terms of the Left- he represents the victory of hate over hope.

Indeed, the elite’s incessant rhetoric and its sanctimonious grandstanding is of such virulence that apart from leftist fanatics and lone crazies- the grim possibility that a mole might emerge among the Secret Service, someone who sees himself as a Von Stauffenberg type figure, motivated by a desire to save America from ‘the Kremlin’s candidate’ can no longer be dismissed: the Brutus complex in its purest and most lethal form.

As the now thoroughly politicized deep state fractures in the manner of some banana republic’s security regime and the tentacles of the US political establishment flail out to the EU-NATO Axis in their attempts to subvert the constitution, the risible message is being sent on all levels that President Trump is both grotesquely illegitimate and that he is, as one CNN opinion piece has put it today- ‘preparing to surrender America’s interests to Russia.’

Accordingly, as a result of this crafty policy of strategic incitement to civil disorder, an anarchist group known only as Disrupt-J20 is planning to attack Thursday’s planned ‘Deploraball’ at the National Press Club with acid filtered into the sprinkler system. Unsurprisingly, the 900,000 expected in Washington for the inauguration are sure to include a motley collection of radicals hell-bent on trouble. That these useful idiots of that same Deep State that lied to them on Iraq have been conditioned into believing they are ‘acting against the imperialist establishment’ underscores their stupidity as well as their sniveling sense of moral justification.

From last night’s lone protester trying to set himself on fire outside Trump Tower to the 200,000 man ‘March on Washington’ planned for just hours after the presidential inauguration, the elites are mobilizing the power of the street fist- methods identical to colored revolution exported by the EU-NATO Axis and the CIA into the Russian geo-cultural sphere and which have employed fascist methods to subvert democracy. Is this what a deep state coup d’état looks like when initiated not in Kiev, but in Washington itself?

Tellingly, the corporate liberal media, while nominally touting the Left’s agenda, is slyly angling for McCain’s deep state neocon faction as it destabilizes American democracy. At no point has this project to erode public faith in the American constitution and the presidency ever acknowledged, even for a second, that its incendiary efforts pose legal culpability and that the madman who cries ‘fire’ in a crowded theater is legally responsible for the chaos that ensues.

In their efforts to ensure Brutus not only feels vindicated- but that he has his audience, the mainstream media and the controlling elitist cartels are no doubt relying on the multiple degrees of separation between them and any potential assassin: Should the unthinkable happen, god forbid, that’s not a view that will be shared by the American people who will undoubtedly demand a day of reckoning.