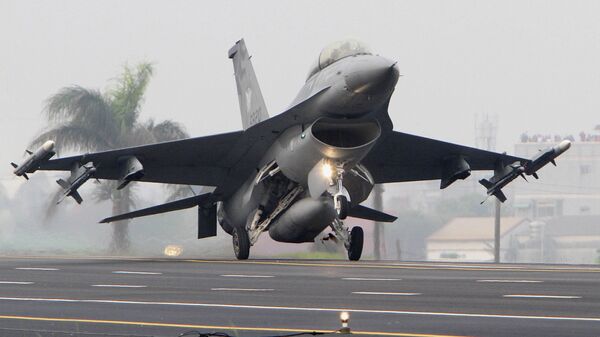 © AFP 2023 / Chiang Ying-ying
Subscribe
International
India
Africa
In what may be a response to a recent show of force by the transit of the Chinese aircraft carrier through the Strait of Taiwan, Taipei initiated defense preparation exercises over the weekend while vowing to "enhance training 365 days a year."

Taipei simulated a scenario in which China’s sole aircraft carrier, the Lioaning, crossed the dividing line of the Taiwan Strait in a simulated attack on the island, home to some 23 million people. China does not acknowledge Taiwan as a sovereign nation, claiming instead that the island country belongs under the principle of "One China" and, as such, is merely a Chinese province. Beijing has indicated that upholding this principle is non-negotiable, and would resort to force should Taipei be acknowledged as independent.

Following a victorious election, Donald Trump took a call from Taiwan President Tsai Ing-wen. This event shook diplomatic circles who pointed out that Trump may not have known that he broke with decades of diplomatic practice in which Washington has not formally addressed Taiwanese leaders.

Earlier in January, Taiwan President Tsai Ing-wen stopped in Houston, Texas, to meet US Senator Ted Cruz and the state’s Governor Greg Abbott. Returning to Taiwan, Ing-wen made a stop in San Francisco as well.

Sputnik News reported that the Taiwan president may have capitalized on the opportunity to lobby for the acknowledgement of Taiwan’s formal independence. Washington remains one of Taiwan’s firmest allies and weapons suppliers. Beijing relentlessly prodded the US to block Tsai’s visit, without success. When Washington did not submit to Beijing’s request, Chinese state media warned US President-elect Donald Trump that further damage posed to the One China principle would force Beijing to "take revenge."

Meanwhile, the Taiwanese air force has recently renovated F-16 A/B fighters into F-16V units. "Taiwan is the first country in the world" to complete the overhaul, an air force official told AFP. "We are enhancing our aerial capabilities to ensure national security," the official noted. F-16 manufacturer Lockheed Martin dubs the F-16V "the most technologically advanced 4th generation fighter in the world."

Taiwan Defense Minister Feng Shih-Kuan has claimed that the F-16V matches the capabilities of China’s J-20 stealth aircraft, a statement Beijing has denounced via state media outlets. Taipei maintains a fleet of 143 F-16s but the air force has not revealed how many of the aircraft have been fully upgraded.