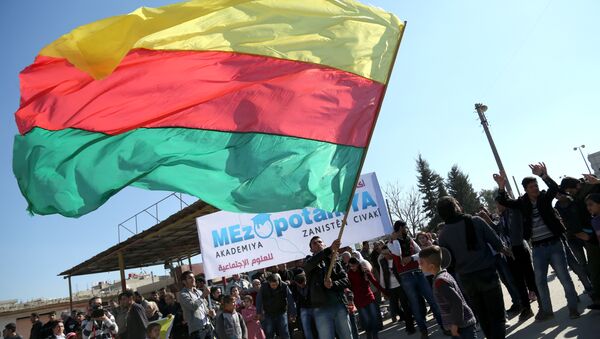 Ankara Opposes Kurds’ Participation in Astana Talks on Syria
Russia is acting as a guarantor of their talks with the Syrian government on federalization.

The representatives of the Syrian Kurdish political forces with the mediation of the Russian side are holding talks with Syrian leadership, regarding the formation of a Kurdish Federation in the north of the country.

One of the negotiators, Kurdish politician Ferid Sedun spoke to Sputnik in an interview about how these meetings are being held with the Syrian leadership.

“With the mediation of Russia, I and two other independent Kurdish politicians were able to meet with the Syrian government in Damascus. During the lengthy negotiations we discussed the creation of a federal system in the area of Syrian Kurds,” Sedun said.

He further said that time will tell if their demand on the formation of the federation will be met.

The representatives of the Damascus promised to consider it in the near future and inform the negotiators of the results of the negotiations soon.

“We believe that the meeting was held in a positive way and we hope for a positive result. Before meeting with us, the representatives of Damascus met with the representatives of the Kurdish People's Democratic Movement at the Hmeymim Base inter alia includes the Party of the Democratic Union. We attach great importance to these contacts,” Sedun said.

At the end of December, Russia invited 24 Syrian Kurdish parties, including representatives of the Kurdish Democratic Union Party (PYD) and the Kurdish National Council (ENKS), for talks at its Hmeymim air base in Latakia, Syria to discuss the upcoming peace talks in Kazakhstan.