Russia Extends Snowden Asylum, Slams Tip to ‘Present’ Him as Gift to Trump 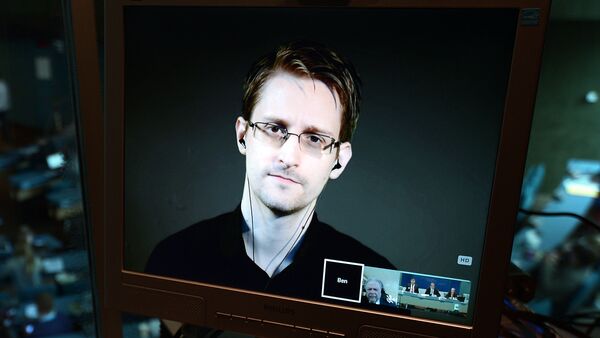 © AFP 2023 / Frederick Florin
Subscribe
International
India
Africa
Maria Zakharova, spokesperson for the Russian Ministry of Foreign Affairs, has bashed the former deputy director of the CIA, Michael Morell, for suggesting that Edward Snowden should be an inauguration 'gift' from Vladimir Putin to Donald Trump. Zakharova also revealed that Snowden’s asylum in Russia has been extended for 'a couple of years.'

In an op-ed published in the intelligence and security publication The Cipher Brief, Morell called the extradition of whistleblower Snowden to the United States the "perfect inauguration gift," and declared that the confidential information leaked by Snowden "benefited [Daesh]… the damage caused was profound."

Morell stated that he believes it would be smart of Putin to perform the extradition, as it would help Trump "overlook Moscow's anti-democratic activities at home and destabilizing activities abroad." He also called the would-be extradition a "poke… in the eye of [Putin's] adversary Barack Obama."

"I'm well aware that Russia does not have an extradition treaty with the US, but I am confident that President Putin is creative enough to find a way within his own legal system to deport Snowden."

In response to Morell's comments, Zakharova made a post on her public Facebook page in which she said, "this is not the first time he has made misanthropic, inhumane statements."

She specifically pointed to a television interview Morell conducted in August 2016, in which he claimed that the United States should make Iranian and Russian soldiers in Syria "pay a price" for their involvement in the civil war. He called for the "covert" assassination of Russian and Iranian soldiers, as well as the bombing of Syrian government installations.

Zakharova said, in condemning Morell's op-ed comments about Snowden, "It is clear that, for the CIA-man's firm, it is normal to present people as gifts and give up those who seek protection."

"You failed to understand Russia, Michael Morell," she stated.

Significantly, Zakharova mocked the fact that the "former deputy head of the CIA… doesn't know that Snowden has had the deadline for a residence permit in Russia extended for a couple more years." Snowden's original asylum was to expire in 2017, but Zakharova has confirmed that a renewal has been secured.

Morell, who was deputy CIA director from 2010-2013, also served twice as acting director: for three months in 2011, and for four months in 2012-2013. He retired from intelligence in 2013 and has been vocally anti-Trump, anti-Putin, and anti-Snowden in recent years. He called alleged Russian interference in the presidential election the "political equivalent of 9/11" and called Donald Trump a "gift to Putin." He also vocally supported Hillary Clinton during the election.