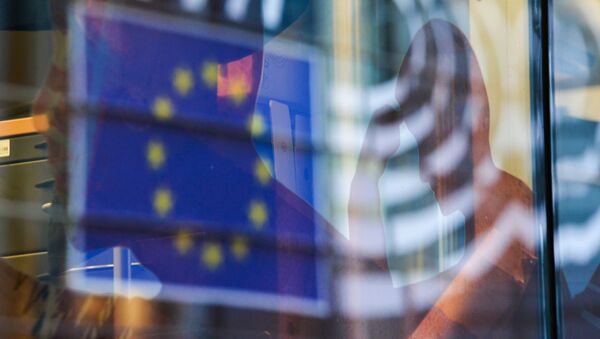 © Sputnik / Alexey Vitvitsky
/
Go to the mediabank
Subscribe
International
India
Africa
The European Union plans to hold a conference on the future of Syria in spring 2017, which is expected to focus on the political transition in and donors' assistance to the war-torn country. Political analyst and former Turkish MP Dr. Oya Akgonenc Mugisuddin told Sputnik that Brussels is unhappy with Russia and Turkey's achievements in Syria.

"They say that a potential donors' conference on Syria could be on the agenda. This is clearly a positive initiative. However, European nations should stop sending weapons to various armed groups in Syria and then genuinely focus on providing humanitarian aid to the country," he said.

Dr. Oya Akgonenc Mugisuddin was commenting on Monday's meeting of the Foreign Affairs Council (FAC). Following the summit, EU High Representative of the European Union for Foreign Affairs and Security Policy Federica Mogherini announced that the EU and the United Nations will hold a conference in the coming months.

EU will convene in Brussels in spring an international conference on the future of #Syria together with UN pic.twitter.com/v72XxVlpVV

​The political analyst pointed to the timing of the meeting, tying it to recent developments in Syria, which have seen Moscow and Anakra broker a nationwide ceasefire. Many hope that this step will pave the way for a peace process in the country devastated by nearly six years of war.

"Russia and Turkey are currently the key stakeholders when it comes to the Syrian conflict. The European Union is not happy about it. This is why they have held their meetings," he said.

Dr. Oya Akgonenc Mugisuddin mentioned that it remained unclear what the EU was doing for Syria at the moment.

"We have seen the European Union adjust its stance on Syria. EU member states were very active during the early years of the Syrian conflict. They have become less active when it became obvious that their policies towards Syria were flawed," he observed.

The political analyst further said that the European Union does not care about Syrians.

Russia's Deal With Turkey on Flights Over Syria is More Than Meets the Eye
"Instead we have seen the rise of Islamophobic and xenophobic sentiments in Europe, although many of the Syrian refugees are Christians. We have seen … refugees denied basic medical assistance. Europe does not care about the fate of the Syrians. Europeans don't view them as people in need of help, but rather as enemies [affecting their livelihood]. In these circumstances one cannot count on comprehensive assistance from Brussels," he suggested.