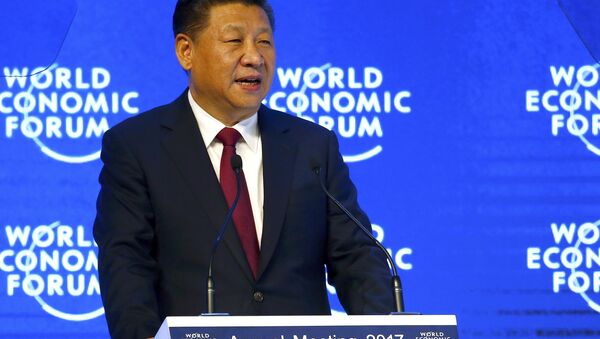 © REUTERS / Ruben Sprich
Subscribe
In a speech at the Davos World Economic Forum on Tuesday, January 17, Chinese President Xi Jinping has come out in defense of globalization, despite the mounting hostility it has already received and the US President-elect Donald Trump's vow to change US trade with China.

Globalization Still Popular Among the Masses Despite Bad Press - YouGov
Xi Jinping was the first global leader to open the 2017 World Economic Forum, an annual meeting of political leaders, CEO's and bankers in Davos.

The Chinese president admitted that for many people globalization has been the cause of the world's problems, however he said that it was wrong to blame everything on this.

Globalization is defined as the process by which businesses or other organizations develop international influence or start operating on an international scale, it has not been the most popular of subjects in the West recently. Governments are failing to prevent citizens from feeling left behind, which is seen as the cause of a lot of the recent political turmoil witnessed around the globe today.

This speech by Xi Jinping in praise of globalisation, while the US and UK retreat from it, sounds like a real juncture in history. #Davos

The arrival of President-elect Donald Trump has only added further ammunition to the argument that globalization is still very present in society, irrespective of any negative press it has had.

China's Xi Jinping defends globalization from the Davos stage: "It is true that economic globalization has… https://t.co/saqGADpVM0 #wef17 pic.twitter.com/BpzhjXdkCp

​The Chinese leader said that the migrant crisis and other problems were not the fault of globalization, but that other factors had contributed to their escalation.

Xi also spoke of the growing populism movement in the West, stating that the world should not write off globalization altogether and that countries should "cushion the impact."

Xi's speech seemed to be aimed at the US President-elect Donald Trump who has already said that he will confront China when it comes to trade.

"Pursuing protectionism is like locking oneself in a dark room. Wind and rain may be kept outside, but so is light and air," he said.

World's most powerful communist, Xi Jinping, argues for free trade at Davos, while president-elect of 'free' world argues for protectionism.

​He told countries not to pursue their own interests at the expense of others adding that "no one will emerge as a winner in a trade war."

Xi's speech according to commentator Yun Sun, Senior Associate with the East Asia Program at the Stimson Center think tank in Washington and a non-resident fellow at the Brookings Institution, demonstrates that China supports trade.

"His speech indicated that China is a strong supporter of global trade and they want to facilitate this throughout the region and globally. That is in stark contrast to what Trump has been saying about trade," Yun Sun told Sputnik.

"The most interesting part of this message is that it seemed to be targeted at the Trump organization," Yun Sun added.

​Xi also urged world leaders to stick to the Paris Climate change deal, despite Trump showing an interest in "canceling" the deal once he becomes US President.

However a recent survey from YouGov, a international market research firm, found that of more than 20,000 people across 19 countries, the majority believed that globalization is a force for good.

Our new international survey finds globalisation is still seen as a force for good in the world (except in France) https://t.co/02QwkekOPz pic.twitter.com/yMK8Ap53vw

With only a few days left before Donald Trump becomes the next president of the US, it seems that global leaders are trying to reassure nations and their citizens on the benefits of global trade.

000000
Popular comments
Here's a much better definition of globalism. I think the article is really twisting what Xi said into what the author(s) want to see. Xi specifically said not to reject ALL globalism. Nothing in his speech defends Obama's brand of globalism or color revolutions. Nothing in his speech says to isolate a country and strangle it into political submission. In fact, Xi referenced the wars as being a bad example. So maybe there are different varieties of globalism. But this article takes what Xi says and apparently defends what the US, Canada and EU are doing, which are obviously different approaches. glob·al·ism (glō′bə-lĭz′əm) n. 1. A national geopolitical policy in which the entire world is regarded as the appropriate sphere for a state's influence. 2. The development of social, cultural, technological, or economic networks that transcend national boundaries; globalization.
jas
17 January 2017, 18:12 GMT
000000
Xi is clearly not, in this speech or in many others, defending the kind of globalist activities currently practiced by the US and depicted in that picture of the woman eating something that resembles Earth. Xi has openly opposed the destruction of national sovereignty and one-world government. He's talking about TRADE and economic cooperation and peace among nations. Of course, he is going to present some topics in favor of China's interests.
jas
17 January 2017, 18:21 GMT
000000
Newsfeed
0
New firstOld first
loader
LIVE
Заголовок открываемого материала
Access to the chat has been blocked for violating the rules . You will be able to participate again through:∞. If you do not agree with the blocking, please use the feedback form
The discussion is closed. You can participate in the discussion within 24 hours after the publication of the article.
To participate in the discussion
log in or register
loader
Chats
Заголовок открываемого материала
Worldwide
InternationalEnglishEnglishMundoEspañolSpanish
Europe
DeutschlandDeutschGermanFranceFrançaisFrenchΕλλάδαΕλληνικάGreekItaliaItalianoItalianČeská republikaČeštinaCzechPolskaPolskiPolishСрбиjаСрпскиSerbianLatvijaLatviešuLatvianLietuvaLietuviųLithuanianMoldovaMoldoveneascăMoldavianБеларусьБеларускiBelarusian
Transcaucasia
ԱրմենիաՀայերենArmenianАҧсныАҧсышәалаAbkhazХуссар ИрыстонИронауОssetianსაქართველოქართულიGeorgianAzərbaycanАzərbaycancaAzerbaijani
Middle East
Sputnik عربيArabicArabicTürkiyeTürkçeTurkishSputnik ایرانPersianPersianSputnik افغانستانDariDari
Central Asia
ҚазақстанҚазақ тіліKazakhКыргызстанКыргызчаKyrgyzOʻzbekistonЎзбекчаUzbekТоҷикистонТоҷикӣTajik
East & Southeast Asia
Việt NamTiếng ViệtVietnamese日本日本語Japanese俄罗斯卫星通讯社中文（简体）Chinese (simplified)俄罗斯卫星通讯社中文（繁体）Chinese (traditional)
South America
BrasilPortuguêsPortuguese
NewsfeedBreaking
05:38 GMTPrince Andrew’s Lawyer Reportedly Served With Sexual Assault Suit Papers
04:36 GMTCanadian Opposition Conservatives Leader Concedes Defeat in Election
04:26 GMTLive Updates: India Reports 26,115 New COVID-19 Cases
04:25 GMTCanada’s Liberals Lead in 157 Districts With 70% of Polls Reporting, Elections Commission Says
03:50 GMTGuterres Urges US, China to Rebuild Their Relationship to Avoid New Cold War - Report
03:42 GMTPhoto: Bolsonaro Forced to Eat Pizza on NYC Sidewalk Because He Is Not Vaccinated
03:31 GMTCanada's Liberals to Win Most Seats in 2021 Federal Election, Projections Claim
03:15 GMTUnited Russia Party Wins State Duma Elections With 49.82% of Votes
02:55 GMT911 Call Reveals Boyfriend Was Seen 'Slapping' Petito Two Weeks Before Her Disappearance - Report
02:31 GMTBiden Reaffirms Strong US-UN Partnership at Meeting With Guterres
02:22 GMTIndia Cuts Off Communications, Internet in Kashmir Due to Terrorists, Reports Say
02:12 GMTMember of CIA Chief’s Team Affected by ‘Havana Syndrome’ During Work Trip to India, Report Says
01:22 GMTClimate Change-Driven Cyclones Could be Regular Sights in Europe in 30-50 Years, Meteorologist Warns
01:02 GMT‘License to Murder Children?’ Psaki Panned for Bringing Up Biden’s Losses in Kabul Strike Answer
00:38 GMTMilley Told Admiral to Halt Operations in Pacific That China Could Deem 'Provocative', Authors Claim
00:11 GMTPremier League Goals of the Weekend
YesterdayMali Looks for ‘Plan B’ to ‘Bolster Our National Defense’ As French Mission Exits, Leaving Chaos
YesterdayGlobal Pandemic Caused Significant Surge in Demand For Black Bridal Dressers, Fashion Experts Say
YesterdayCoronavirus Death Toll Surpasses 1918 Influenza to Become Deadliest Pandemic in US History
YesterdayIran's New Defense Minister Says Enemies Will Get 'Crushing Response' - Report